Directed by Bennett Miller
A richly developed psychological drama about the fire of ambition in the lives of a gold-medal winning wrestler and a multimillionaire wrestling enthusiast.

The Art of Wrestling

"In order to become a wrestler, one should have the strength of a weight-lifter, the agility of an acrobat, the endurance of a runner and the tactical mind of a chess master."

In 1984 Mark Schultz (Channing Tatum) was a gold-medal winner in wrestling at the 1984 Los Angles Olympic Games. But now three years later, he is in a rut, wasting time in his apartment and giving boring pep talks to elementary school students. His only meaningful relationship is with his older brother Dave (Mark Ruffalo) who also won a wrestling gold-medal. But he lives in Colorado with his wife Nancy (Sienna Miller) and their two kids.

Mark has mastered the art of wrestling but is — like many of us — a beginner at the art of living with integrity, wisdom, creativity, and hope.

Money — Both Miraculous and Maligned

"Money is the most universally motivating, mischievous, miraculous, maligned, and misunderstood part of contemporary life," writes Lynn Twist, a global activist and fundraiser, in The Soul of Money. It can carry our finest intentions, convey our love, and signal our commitments. Yet it remains for many an idol and constant source of guilt and regret.

Born in 1938, John du Pont is the great-great grandson of E. I du Pont, who started a gunpowder business in 1802 that would become one one of the world's most profitable industrial chemical companies. His parents were divorced when he was two, leaving John (Steve Carell) and his mother (Vanessa Redgrave) alone on the estate where she raised ponies.

The power that comes with old money enables du Pont to do what he wants most: to train a team of wrestlers who can win at the next Olympic Games in 1988. This possessed rich man believes that Mark Schultz can help him achieve his dreams of winning gold and establishing American dominance in the sport.

Du Pont flies Mark first class to his estate and offers him a large amount of money to live in a luxurious guest house while he trains the team. The young wrestler accepts the deal and wants his brother to come on board as a trainer as well. But Dave turns him down, citing his family obligations and job.

It is interesting to watch Mark struggle with the personal wrestling lessons that he is forced to give to du Pont as part of his package deal. Even more troubling is when his patron encourages him to take cocaine with him. Both of these activities have a dire effect on Mark's strength and focus on the wrestling mat. He is not as quick as he used to be and his flips, spins, and escapes lack force. Soon Mark finds himself on a downward spiral of physical deterioration and mental weakness.

The Yearning for Trophies and Winning

"Strength does not coming from winning. When you go through hardships and decide not to surrender, that is strength."

Everybody wants to be a winner. It is part and parcel of Western culture and mythology. The omnipresent "We're number one" signifies the false self's need to be seen as special, to stand out in victory. From day one, kids are taught to think like a winner. Yet we're all failures — at least, the best of us are.

Du Pont cannot stomach Mark's breakdown and failure to be the winner he thought he was. He turns against him, calling him "an ungrateful ape." Then he hires Dave, who out of concern for his brother, decides to take the job. At the start, du Pont and Mark are in sync with each other in their yearning for trophies and winning. But when this talented wrestler learns the high price of victory, he opts out and leaves the du Pont compound.

This is the third film directed by Bennett Miller which revolves around the fire of ambition. In Capote about a writer and Moneyball about a manager who changed the sport of baseball, we see characters who struggle with hardships and do not give up. In this richly developed psychological drama, Miller has drawn out an Academy-Award caliber performance from Steve Carell as the Pennsylvania multimillionaire who never comprehends that, as the prophet Muhammad put it, "A person's true wealth is the good he does in the world."

Special features on the DVD include deleted scenes, and The story of Foxcatcher. 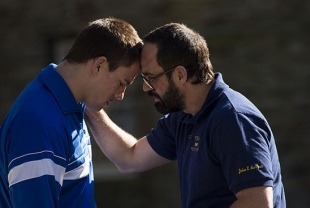 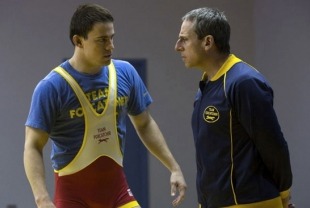 R – some drug use, scene of violence