Directed by Daniel Percival
A devilishly good whodunit by P. D. James that is a sequel to Jane Austen's Pride and Prejudice.

As we began to watch Death Comes to Pemberley on the PBS Series "Masterpiece Mystery," we fondly recalled the galloping positive emotions we felt as Darcy and Elizabeth passionately embraced each other at the end of Jane Austen's Pride and Prejudice. We liked these two enough to wonder what would become of them. Now thanks to the imagination of P. D. James (the creator of Inspector Adam Dagliesh) we have a murder-mystery sequel to Austen's 1813 novel. The devilishly good screenplay by Juliette Towhidi (Calendar Girls) gives us a chance to savor the lovely scenery and follow all the plot twists and turns in this British costume drama.

We pick up in the lives of Darcy (Matthew Rhys) and Elizabeth (Anna Maxwell Martin) six years after their marriage. They live on his sprawling estate and employ a large staff of people. Darcy's sister Georgiana (Eleanor Tomlinson) is living at Pemberley and trying to deal with two suitors who both want to marry her.

The household is preparing to host a ball. But everything is interrupted when George Wickham (Matthew Goode), a man who has meant trouble for Darcy and Elizabeth before, arrives on the scene and turns out to be the prime suspect in the murder of his best friend. Wickham's wife Lydia (Jenna Coleman) is Elizabeth's younger sister and she is distraught over her husband's plight. The investigation moves forward under the guidance of Sir Selwyn Hardcastle (Trevor Eve), a neighbor who doesn't like Darcy and whose family has a history of intolerance in legal matters.

The tensions brought about by all the guests and the murder pit Elizabeth and Darcy against one another as they each try to deal with the larger implications of the investigation. Director David Percival draws out a superb performance from Anna Maxwell Martin whose intuition proves to be quite powerful, and Matthew Rhys is perfect as the sometimes stodgy and othertimes affectionate Darcy. 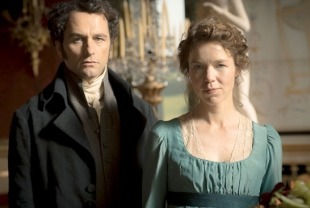 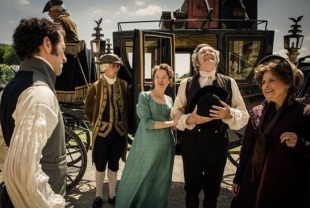 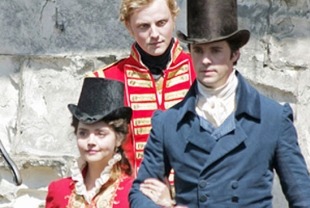 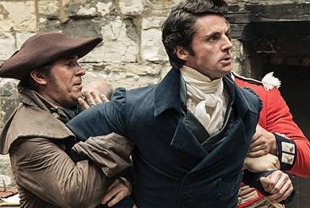