Directed by Kate Barker-Froyland
An emotionally rich drama about the healing powers of music.

Listening to music can ease our minds and soothe our hearts — which just might help us to solve our problems more easily, or at least enable us to face them with greater patience and trust.
— Melannie Svoboda in Everyday Epiphanies

Song One follows in the train of John Carney's Once and Begin Again with its emphasis on the healing power of music as a grace in our everyday lives. The neo-folk ballads play such a large role in the drama that they could be considered another character. If you are into the connections between music, love, healing, and familial reconciliation, this is your cup of tea. Others who are more jaded and cynical should do themselves and everyone else a favor by staying home. Here we are referring to a critic at the screening we attended whose nonstop repetitive sighs of disapproval for the melodramatic excesses of Song One were heard by all in the room.

Henry (Ben Rosenfield) is a talented singer who has dropped out of college to pursue his craft and loves what he is doing so much that he seizes every possible moment to share it with others. This occasionally leads him to improvise performances in subway stations. When he is hit by a car, Henry's mother Karen (Mary Steenburgen), a writer, calls Franny (Anne Hathaway), his sister, who is in Morocco trying to complete her Ph. D. studying nomadic tribes and their traditions.

She and her brother haven't seen each other for six months after Franny told him that he was crazy to give up college for his music. Now laden with a ton of guilt and regrets, she is really depressed and frightened when the doctor tells her that Henry might never come out of a coma.

Franny does everything humanly possible to draw closer to her brother by listening to the songs he created, by reading his diary, and by going to coffee shops and crowded rooms where other aspiring singers and songwriters share their music. The high point of this pilgrimage is when she meets Henry's favorite musician, James Forester (Johnny Flynn), a troubadour with a hit album released five years ago who has an adoring fan base. Franny tells him about her brother's condition and gives him a demo tape of his best song. These two lonely and emotionally burnt-out individuals begin dating: he's looking for a muse and she needs the soulful support that has never come from her mother.

Writer and director Kate Barker-Froyland does not shy away from the melodramatic elements of the drama. She makes the most of Anne Hathaway's emotional vibrancy and draws out a stellar performance by Johnny Flynn who comes across as a shy, sensitive, creative, and thoughtful singer/songwriter. There is a healing power to music and it can work wonders like it does in Song One! 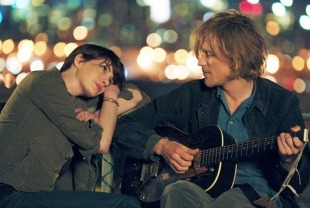