Directed by Dan Gilroy
A gripping drama about a wily hustler who finds success as a freelance photographer of night-time car crashes and violent crimes.

Lou Bloom (Jake Gyllenhaal) is a wily L.A. hustler who steals some scrap metal, sells it to a businessman, and then asks him for a job. "I am not going to hire a thief, " the man says.

Driving around the city, Bloom happens upon the scene of a car crash. He watches a drama unfold as police rescue a person from a wreck and a freelance photographer shows up to film the disaster scene. Bloom realizes he could do the same kind of work.

Bloom is a quick learner who puts together his own nightcrawler operation with a camcorder and police scanner. He finds himself competing against Joe Loder (Bill Paxton), a veteran who is the head of Mayhem Video. It is amply named since the intent is to sell graphic images of car accidents and violent crimes on the morning news of L.A. television stations.

Bloom finds the perfect person to buy his gruesome material. Nina Romina (Rene Russo) is news editor at the city's lowest rated station, She works the dusk-to-dawn timeslot known as "the vampire shift." She tells the eager Bloom, "I want something that people can't turn away from . . . Think of our newscast as 'a screaming woman running down the street with her throat cut.' " Bloom with a surge of fresh energy and confidence hires Rick (Riz Ahmed) as his assistant and begins beating Loder to the punch with the most gruesome footage in town. He even gets to one scene of a murder in suburbia before the police do.

Nightcrawler is written and directed by Dan Gilroy who has drawn out an eerie and effective performance from Jake Gyllenhaal as an ambitious young man who is hungry for success and fame. He is willing to break any rule in the book in order to get ahead. The film also offers a devastating critique of TV news that is so dependent on "If It Bleeds, It Leads." Hats off to the astonishing images of L.A. at night by veteran cinematographer Robert Elswit.

Special features on the Blu-Ray/DVD include "If It Bleeds, It Leads": Making Nightcrawler"; feature commentary with writer/director Dan Gilroy, Producer Tony Gilroy, and Editor John Gilroy. 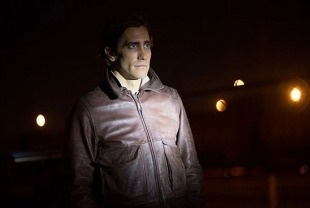 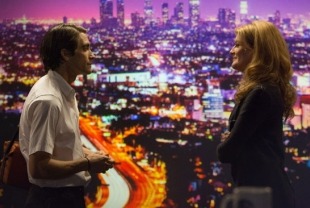 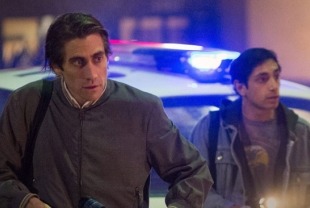