Directed by Martin Ritt
This inspiring movie really connects with our emotions and Sally Field has the meatiest role of her career.

"Stands must be taken. If I am to respect myself I have to search myself for what I believe is right and take a stand on what I find. Otherwise I have not gathered together what I have been given; I have not embraced what I have learned; I lack my own conviction." This statement by spiritual writer Hugh Prather could just as well have been said by the protagonist of this inspiring movie.

Norma Rae (Sally Field) and her parents work in a textile mill in a small Southern town. Conditions are pretty bad — lousy wages, long hours, and minimal health precautions. Reuben Warshovsky (Ron Leibman), a labor union organizer, arrives from New York City to help the maltreated workers. It's a hard road for him since anti-unionism is the bedrock of the textile industry. The workers themselves seem more willing to wash down their discontent with a beer than join a union.

Warshovsky wins over Norma Rae to his crusade. She's a feisty mother of two who is impressed with this urban Jew's idealism. They strike up a friendship. He shares the story of his first sexual affair and gives her a feel for what it is like to live in New York City. She tells about her unlucky relationships with men and offers some hints about communicating more effectively with people at the plant.

When management learns of Norma Rae's involvement with Warshovsky, they try to get her on their side by promoting her to a better job. But she realizes this advancement is jeopardizing her friendships with fellow workers and returns to her old position. She begins working after hours with Reuben.

This inspiring movie really connects with our emotions. Director Martin Ritt tackles the subject of unions with an earnestness that is rarely seen in films today. Screenplay writers Irving Ravetch and Harriet Frank, Jr., wisely focus on people rather than abstractions. The story's heroes are well developed and understandable; and there are no cardboard villains.

Sally Field has the meatiest role of her career as Norma Rae. At the heart of the story is her relationship with Reuben. It has a sexual color to it but the energy is channeled away from the physical into what could perhaps be called "creative energy." She brings him out of his ivory tower, and he introduces her to Dylan Thomas and the ardors of idealism.

Norma Rae finds that her fight for the union gives her a place to stand, a chance to gather together what she's been given. Even though it puts immense pressure on her new marriage to Sonny (Beau Bridges), her conviction must be followed to its conclusion. Norma Rae's strength is sapped when her father dies of a heart attack, which she realizes is closely related to the pressure at the plant. Her dedication to the cause is further threatened when talk about her illegitimate child and loose living spreads throughout the community. In a very emotionally affecting scene, Norma Rae tells her two small children about their different fathers. In doing so, she affirms her love for them.

Ron Leibman's portrait of Reuben is intense, witty, and convincing. He's off balance in this Southern community yet he keeps on his feet and manages to bring his message across. Although Reuben finds Norma Rae attractive, he proves his devotion to her in another way: by supporting her total commitment to the project. In the end when they part after bringing about a union in the textile mill, there is no "goodbye," as Reuben puts it. These two will always carry each other within as an internalized friend — they are each part of the other's past, each other's history.

The DVD release includes the original trailers for the film and a 24- minute documentary about the making of the film, which was nominated for an Academy Award as Best Picture. Sally Field, who won the Best Actress Oscar for her performance, talks candidly about what it took for her to do this role. 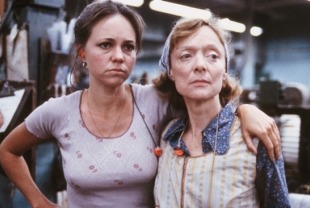