Directed by Thomas Cailley
French film about two adventuresome youth who go into training for the end of the world.

Youth around the world are fearful about their futures on a planet that is showing signs of wear and tear with floods, droughts, hurricanes, tsunamis, extreme weather, the extinction of animal and plant species, and much more. What will be left for them and how will they survive? In a relaxed and thought-provoking storytelling style, director Thomas Cailley gives us a glimpse of how a young man and woman deal with their feelings and apprehensions about the coming End of the World.

Arnaud (Kevin Azais) is working with his brother trying to maintain a carpentry business they inherited from their recently deceased father. Then he meets Madeleine (Adele Haenel), an independent thinking young woman who is in perfect physical condition thanks to swimming and other exercises. She also gulps down a raw sardine drink made in a blender for energy and strength. Whenever they talk, Madeleine proves herself to be a very self-assured person.

Arnaud volunteers to take her to the next town to enlist in a two-week military boot camp. Realizing that Madeleine is the most interesting and sexy woman he has ever met, he decides to sign up for the training as well. The two of them handle the rigors of the boot camp in different ways and test their relationship along the way. But the ultimate challenge they decide to face is their own survival experiment in the woods. Meanwhile, huge wildfires can be seen in the background.

There is no shortage of chemistry between Adele Haenel and Kevin Azais as they interact with each other far from home and the familiarities of family life. Haenel is a talented and charismatic actress who vividly conveys Adele's Jennifer Lawrence toughness, and Azais effectively creates a character who, when pushed to the extreme, proves to be the heroic and caring person we hoped he would be in the wilderness — especially when tragedy overtakes their adventure. 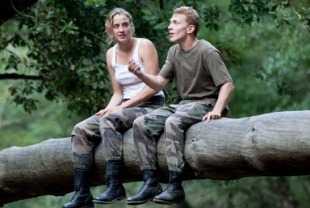 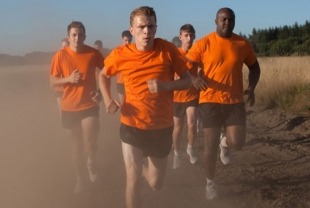 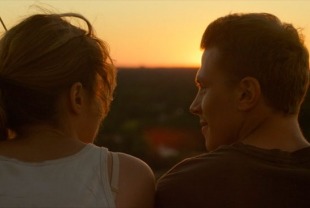