Directed by Chaitanya Tamhane
An arresting courtroom drama that depicts the divisions in contemporary Indian society.

In this clever and highly critical legal drama set in contemporary India, Narayan Kamble (Vira Sathidar), a 65-year old folksinger and social activist, is arrested. What is his crime besides being seen by the state and police as a rabble-rouser and trouble-maker? Nutan (Geetanjali Kulkarni), the conservative public prosecutor, armed with legal precedents from the last century and one witness, claims that Kamble "abetted" the suicide of a sewer-worker through one of his folk songs.

The defense attorney Vinay Vora (Vivek Gomber) is a sophisticated young man whose highly developed social conscience animates him to take cases such as this one. In the courtroom, he does his best to give his client a fair hearing but seems appalled by the weakness of the case against the folksinger and "untouchable."

Writer and director Chaitanya Tamhane orchestrates the scenes in the courtroom with a mix of realism and an eye on the absurd. He then follows both the public prosecutor and the defense attorney into their private lives. Vora is an example of "modern India" who purchases Western cheeses and wines in an upscale store and then joins a friend at a bar where an Indian singer performs material with an international flavor.

In contrast, Nutan is a dutiful mother and wife, picking up her son from school and cooking dinner which her unappreciative family consumes while watching television. The high point of her time away from work comes when she attends a comedy at a theatre which delivers an "us versus them" message that sends the crowd into vociferous clapping.

The director humanizes both lawyers, refusing to make Vora into a snob or Nutan into a cold fish. The defense attorney exudes empathy, and the prosecutor is a true believer in maintaining the status quo. Hats off to Vira Sathidar as a crusader for justice whose presence and singing performance are credible and inspiring. Usha Bane makes a fine impression as the illiterate widow of the sewer worker. And in a surprising coda, we join the judge on a rural retreat where an incident reveals his true colors as a human being. 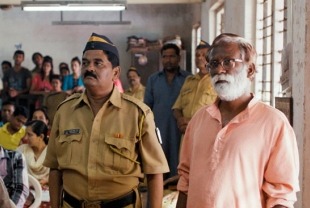 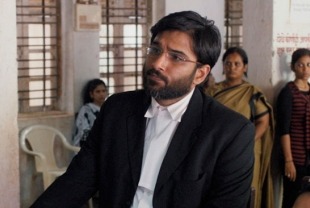 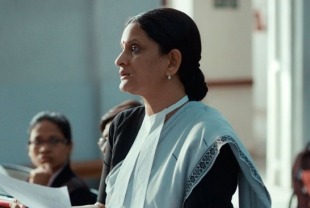