Directed by Rupert Goold
A riveting and rigorous examination of lying.

We live in a world where lying is rampant and the truth has been run out of town. We have watched some of the richest men in America lie before Congressional hearings about tobacco, cars, and pharmaceuticals. We have witnessed one politician after another leave office after proof of deceit. We have read about journalists who plagiarize, college students who cheat on major tests, and scientists who falsify research records.

Social psychologist Bella DePaulo has discovered in her studies that people lie in one in five of their daily interactions. Pamela Meyer, author of Liespotting states in a TED talk that we're lied to from 10 to 200 times a day. Some of these are just "little white lies" whereas others are stories we tell ourselves in order to exaggerate our importance or to run-for-cover after being exposed as someone who has a low regard for the truth.

True Story is a riveting film that puts two very different liars together as they try to establish a friendship in an unconventional setting — a prison. One man is willing to do anything it takes to advance his career. The other, who is in prison on charges of murdering his family, is a charming and clever narcissist who has learned how to manipulate and deceive everyone who comes in contact with him. Paying close attention to their words, body language, and deeds; we have a chance to take a hard look at lying and what it does to friendship, marriage, work, and writing.

Michael Finkel (Jonah Hill) is a hotshot journalist for The New York Times whose features and cover stories have made him famous in his early 30s. He wants more of the same and is willing to stretch the truth if it makes for a better and more impactful story. When his editors discover that he has created a composite character for an article on Ivory Coast cocoa plantations and aid organizations, he is ordered to write an apology and return home in shame to Montana. His wife (Felicity Jones) tries to help him weather the storms of guilt, anger, and disappointment that surge through him after he is turned down again and again when he pitches new stories to other papers and magazines. He can't believe that his career seems to hinge on one fabrication.

Finkel learns from another journalist that Christian Longo (James Franco), who has been accused of murdering his wife and three children, has been apprehended in Mexico, where he has been using the name Michael Finkel. Intrigued, the real Michael writes the prisoner a letter in which he admits, "At the same time that you were using my name. I lost my own. I am sort of seeking to find out who I really am."

When Finkel meets Longo for the first time in Oregon, the accused murderer says that he has closely followed his career and read all his pieces. He offers the journalist an exclusive on his story in exchange for his teaching him how to be a better writer. The two meet regularly and soon Finkel has enough material from the interviews to pitch a book to HarperCollins. Both men are using the other for his own advantage and it soon becomes apparent that the journalist is getting the shaft as Longo assumes the dominant role in their unusual friendship.

Rupert Goold directs this character-driven drama with an intense focus on these two men. Both Jonah Hill and James Franco give superb performances. The screenplay by Goold and David Kajganich is based on Finkel's memoir.

At one point, Longo calls Finkel's home and talks to his wife revealing that he knows quite a bit about her. She is enraged by what he is doing to her husband. Later visiting him in prison before his trial, she speaks the truth to this pathological liar. It is a powerful and poignant scene that reveals Longo's true colors.

After the movie was over, we reflected on this truth-telling scene and remembered a verse by the Sufi sage Rumi:

"I honor those who try
to rid themselves of any lying,
who empty the self
and have only clear being there."
— version by Coleman Barks in The Essential Rumi 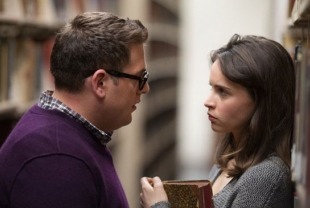 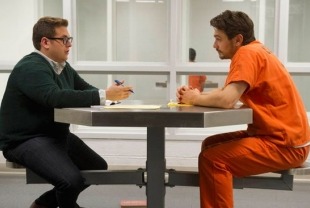 R - language and some disturbing material