Directed by Dana Nachman, Don Hardy
A harrowing look at the irresponsibility of the chemical industry which is making many products that are unsafe to use.

"A chemical is innocent until proven guilty" means that many more people are suffering and dying while gigantic chemical companies are making more money using unsafe substances. Since 1975 breast cancer rates have risen more than 30% in women and men. In 1999, 1 in 500 kids had autism; now it is 1 in 88. There are reasons for this.

There are 80,000 chemicals on the market in the United States — and they are ingredients in couches, curtains, shaving creams, shampoos, make-up products, baby bottles, home-building materials, and much more.

Sean Penn is the executive producer and narrator of this hard-hitting documentary by Don Hardy and Dana Nachman. Since the Environmental Protection Agency is doing very little to safeguard the public from the toxins all around us, activists have sprung up all around the country to speak out against these hazardous chemicals.

Of course, for years advertising agencies have peddled lies about the ease in using plastic dishes which don't break when they fall on the kitchen floor, how cool families use lead paint, and how flame retardant chemicals make sure children are saved from burns in a home fire.

In addition, the American Chemistry Council has funded bogus scientific safety studies. In 2011, these companies spent $52 million on lobbying. Up against these formidable forces, the filmmakers present the bold and courageous efforts of activists such as a breast cancer survivor, a disability policy advocate for the autism society, a co-founder of the Campaign for Safe Cosmetics, a worker at a green skincare line, and a Latina house cleaner.

The documentary looks at several toxic chemicals still in use, such as BPA, an industrial chemical in plastic bottles and metal based food and beverage cans since the 1960s; BHA which has estrogen properties and has been labelled an endocrine disruptor; and PVC used in building materials and linked to cancer and immune system damage.

Hopefully all the activism by individuals and nonprofit organizations will be amplified by a system set up in Europe that is compelling companies to prove their products are safe before they are allowed in the marketplace. A second positive development is the rise in consumer interest in supporting "green" products.

You can judge the value of The Human Experiment by whether or not it sends you to the kitchen or bathroom to check out the safety of products in your home. The film's website has a section on "Switch to Safer" that will help you make good chemical-free choices. 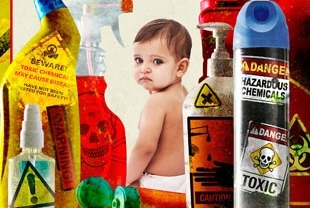