Far From the Madding Crowd

Directed by Thomas Vinterberg
An amazing meditation on yearning and the brimming hearts of three men and the woman they all want to marry.

Bathsheba Everdene (Carey Mulligan) is a spunky, strong-willed, and impulsive young woman who sees herself as an independent soul. She is as unusual as her name. While visiting an aunt in the countryside, she meets Gabriel Oak (Matthias Schoenaerts) who tends sheep on his farm on the rolling Dorset hills.

He is quite taken with her beauty and spunk. But when Gabriel musters the courage to ask her to marry him, she honestly admits that she has no desire to settle down and be a wife. Still, fate draws these two together in a way that neither could have imagined.

Gabriel loses his farm after his flock of sheep are destroyed in a horrific accident and just as quickly Bathsheba's destiny rises when her uncle dies and passes on his land and large estate to her. She is thrilled to take on the challenge of managing the farm, even if the men in the community aren't convinced she can handle it. Seeing Gabriel and learning about his dire straits, Bathsheba hires him as her shepherd. In her closing remarks to her employees on pay day, she declares, "I shall astonish you all."

Mr. Boldwood (Michael Sheen) is a wealthy bachelor neighbor who is impressed with her beauty, ambition, and pluck. Bathsheba senses his interest in her and sends him an unsigned valentine. Not a romantic man by nature, he is unhinged by his emotional feelings for her. But when Mr. Boldwood proposes marriage, she turns him down. He promises to keep trying to convince her to be his wife.

By now, although Bathsheba still sees herself as an independent spirit, she relies more and more on the talents, honesty, and integrity of Gabriel. When he criticizes her treatment of Mr. Boldwood she explodes in a fit of anger and fires him, but she is forced to hire him back when her sheep fall sick and no one knows what to do.

At a point in her life when the routines and the responsibilities of the farm no longer enchant her, Bathsheba falls in love with Frank Troy (Tom Sturridge), a dashing, youthful, and seductive sergeant in the military service. They experience a heated erotic affair even though this young man still has a special place in his heart for the beauty who disappeared after leaving him standing at the altar in a church on their wedding day. Riding a wave of happiness, Bathsheba marries Troy but it does not take him long to reveal his true colors which sours their relationship.

Thomas Vinterberg directs Thomas Hardy's fourth novel which is the fourth official movie based on the book. In this Danish director's previous films, Dear Wendy and in The Hunt, we have seen signs of his skill in dealing with the challenges faced by outsiders who are simply trying to make their own way in the world. Vinterberg draws out an Academy Award caliber performance by Carey Mulligan as a head-strong woman whose emotional repertoire is given a workout. She dazzles in scenes where she lies down on the top of a horse while riding through a forest; when she entertains a large table of guests with a beautiful rendition of a well-known ballad; when she proves her abilities as an entrepreneur in the marketplace dominated by chauvinist men; when she is caught up in the exhilaration of her first sexual affair; and when she is a big enough person to admit the errors of her ways in her treatment of Gabriel and Mr. Boldwood.

Far From the Madding Crowd is an amazing meditation on yearning and the brimming hearts of three men in love with the same inimitable woman.

"The longings of the human heart, the desires for meaning, purpose and fulfillment are all born of a yearning that defies rational explanation. Mystics have known this for many millennia. And so have most humans, if they learn to trust their intuitive wisdom," writes Diarmuid O'Murchu, a priest and social psychologist based in London.

Many scientists have a limited view of desire, and many religious leaders have expended a vast amount of energy in moral campaigns against the baseness of desire. We turn to movies like Far from the Madding Crowd to see how desire and yearning can open up fresh understandings of complicated relationships.

We love movies about people motivated by deep desires to succeed in doing what no one has done before. We admire their yearning to travel around the world, to be free enough to do whatever they want, to find lovers who draw out the best in them, and to establish a legacy that will stand the test of time.

As we watch the characters in Far From the Madding Crowd, we recognize their dreams, wishes, and hopes, as ones we have had. We also empathize with the suffering, pain, and disappointments they endure.
For example, when we first meet Gabriel and he proposes to Bathsheba, he expresses his desire to have a successful debt-free farm and raise a family in the country. Then we witness one terrible evening when he is awakened by a commotion with his sheep. He goes outside and hears his untrained dog barking; off in the distance the sheep are fleeing from him. They are headed toward a cliff. When the first jump off to their deaths, the rest follow. In a blink of an eye, Gabriel's life is unhinged, and he is a homeless man who must forge a new dream and a new desire for himself.

Mr. Boldwood is a decent, soft-spoken bachelor who keeps to himself. After meeting Bathsheba, his heart is filled with hope that he has at last found the woman of his dreams, even though she is much younger than he is. He suddenly experiences the disruption of his normal way of living. After she turns down his marriage proposal, he sinks into a depression.

The yearning of these two good men is palpable on the screen. They both are consumed by a need and an ache for something more. Gabriel hides his feelings of sadness and loss better than Mr. Boldwood, but both are brought to the brink by the intensity of their love for Bathsheba and their disappointment with her refusal to step into their dreams.

A final side of Bathsheba's complicated yearning is succinctly and beautifully expressed by the Catholic radical Dorothy Day who once wrote:

Behind Bathsheba's taking care of business and handling the farm and all its employees is her yearning for community as a way of assuaging her "long loneliness." For a time, this emotional need animates her days and doings and the farm is enough. But her yearning comes back when she learns that Gabriel is leaving her employ and going to America. 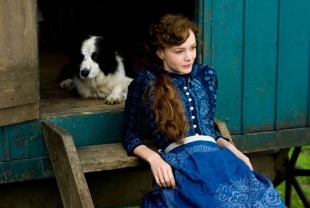 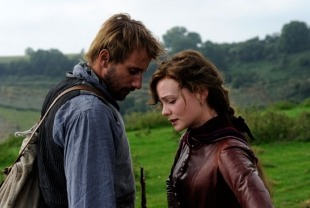 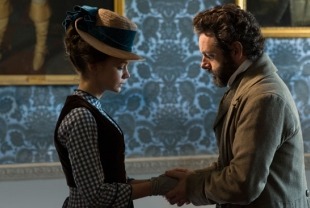 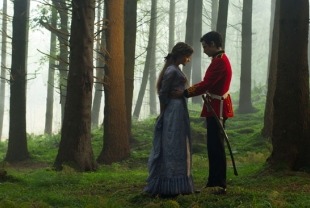 PG-13 – some sexuality and violence