Directed by Ingo Haeb
A German morality tale about a shy and fastidious cleaning woman whose curiosity takes her to places she does not expect to go.

Lynn (Vicky Krieps) is a shy young woman who lives alone and works as a chambermaid at a hotel. She is known for her meticulous cleaning methods. The manager of the place tells her that she is popular with the guests because she can make a room so clean that one could eat off the floor.

Lynn is a lonely person who calls her mother every Sunday but evidences no affection for her. She regularly sees a therapist and dryly recounts her activities. We learn that she spent some time in an insane asylum but are not told the reason why. 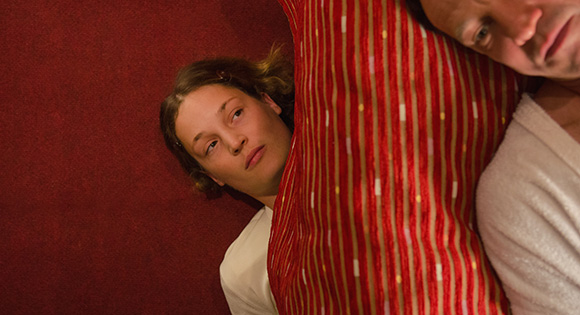 Suffice it to say, Lynn is a solitary person who uses her routines as a shelter from the storms of her libido and emotional outpourings. In order to assuage her immense curiosity about the private lives of others, she begins secretly going through their clothes and other possessions. Then one night, Lynn spends the whole evening underneath the bed of a hotel guest. It is a bold step for her and it is followed by another evening of the same behavior, only this time she goes a bit further and contacts Chiara (Lena Lauzemis), a blonde dominatrix who does her rituals with her client while the chambermaid tries to imagine what is happening above her. When Lynn gets together with Chiara herself, whole new possibilities open in her constricted life.

The Chambermaid is a German character-driven drama directed by Ingo Haeb based on a novel by Markus Orths. Vicky Krieps gives a stellar performance as a shy chambermaid whose voyeuristic tendencies and yearning for sexual experience takes her places she does not expect to go.

Many writers have expressed their way of life in one-liners. Here Lynn does the same when she observes: "The beauty of cleaning is that everything gets dirty again." In the creative arc of the screenplay by director Haeb we see the chambermaid's transformation from a shy recluse to a more alive young woman.

Special features on the DVD include the short film Worlds Within.