Directed by Hou Hsaio-Hsien
An enchanting cinematic work of art that turns a martial arts drama into a meditation on beauty and empathy.

Could a greater miracle take place than for us to look through each other's eyes for an instant?

In his last film Flight of the Red Balloon, the Taiwanese director Hou Hsiao-Hsien enchanted us with a Parisian drama loosely inspired by the classic 1956 French film The Red Balloon. A seven-year old boy spots a balloon floating above him at a subway entrance. Although he playfully beckons it to follow him, it has a mind of its own and wants to glide above the city for a while. Watching this leisurely story unfold, our hearts were lifted by the red balloon, symbol of beauty and joy.

Now Hsiao-Hsien has turned his immense aesthetic talent to a martial arts film. As you might imagine, the result is unlike any other work in this popular genre. Fans of fast-paced martial arts battles drenched with death and destruction will not be lining up to see this meditative, slow-paced, detail-oriented, and highly ethical movie. But if you appreciate those last qualities in a film, you will want to experience the idiosyncratic and exotic beauty of The Assassin, which was heralded at the 2015 Cannes Film Festival where Hou Hsiao Hsien won Best Director.

In the black-and-white prologue, we learn of the conflict and instability afoot in the 9th century Tang Dynasty in China. Relations between the Imperial Court and the Weibo province are uneasy. Nie Yinniang (Qi Shu) is an intense young woman from Weibo who has been educated by Jiaxin (Sheu Fang-yi), a princess-nun. Much to the dismay of her relatives, she has been trained to be an assassin of corrupt officials. She moves with incredible speed and accuracy as demonstrated by her ability to slit the throat of a man on horseback. When assigned to kill a governor, Yinniang comes upon him when he is cradling his sleeping son, and is so moved by the tenderness of the moment, she is unable to take his life. She is then told by her master that, having failed this test, she is being sent to Weibo to kill her cousin. 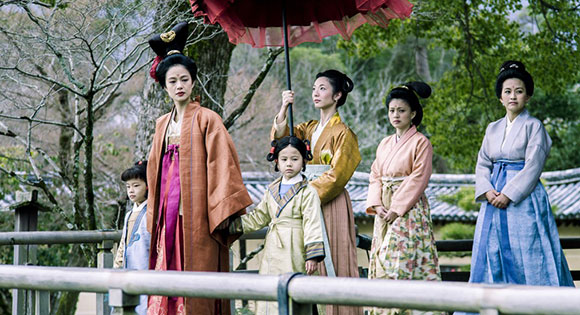 After shifting to luscious color, Hsiao-Hsien makes the most out of the bejeweled costumes of members of the Imperial Court, the verdant green forests, the mist rising from the lakes, the torches used at night by riders outside and the candles proving light for those inside, the silk clothing, and the curtains that move gracefully with the wind. This is a sense-luscious film that takes its time revealing its secrets. The photography by Ping Ben Lee, editing by Huang Chih-Chia, and costumes by Huang Wen-Ying make impressive contributions to the overall visual exquisiteness of The Assassin. Equally fine is Lim Giong's score with its drumbeats alternating with zither music. 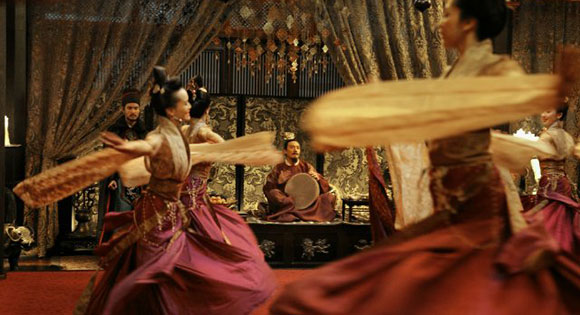 At times, the plot is hard to follow and the lead character does not reveal much emotion; nonetheless this creative cinematic work transports us to a faraway and unfamiliar world where we are challenged to find our way by stumbling in the dark. In addition to the story of Yinniang, the director focuses on Lord Tian (Chang Chen), a woman (Hsieh Hsin-ying) who has hidden her pregnancy, and a sorcerer who is up to no good. 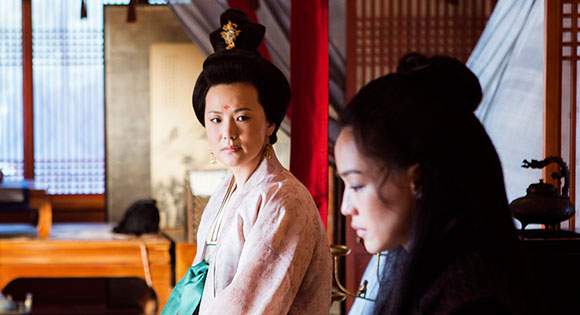 On a spiritual level, The Assassin delivers a message of nonviolence that we salute: it is voiced by Jiaxin to Yinniang:

"The way of the sword is pitiless. Your skills are matchless but your mind is hostage to human sentiments."

The martial arts teacher says this as a criticism, but we applaud what it reveals. Empathy is a human sentiment of great worth. By looking outward and attempting to identify with the experience of others, we can transform our own lives and bring about a lasting change in the lives of others.