Directed by Steven Spielberg
A terrific portrait of an American hero during the Cold War whose zeal for justice is awesome.

In these times of tension brought on by the war on terrorism, it is fitting that Steven Spielberg should choose to put on the big screen the heroism of a gifted American lawyer who defended Soviet spy Rudolf Abel in a 1957 espionage trial and then went on to even further miraculous acts in negotiations to save the lives of two U.S. prisoners of war. These dramatic moments in history are delivered through another high-class and memorable performance by Tom Hanks. He plays James B. Donovan, a founding partner in a New York City law firm and an avid believer in justice for all and the relevance of the Constitution to all political issues.

This skilled and hard-working lawyer is asked by the Brooklyn Bar Association to represent Rudolf Abel (Mark Rylance), a high-ranking Soviet spy who has been arrested for espionage. He is a quiet man who loves to paint. Asked repeatedly by Donovan why he isn't more worried about the danger of his plight or the possibility of being sentenced to death, the prisoner's response is "Would it help?" 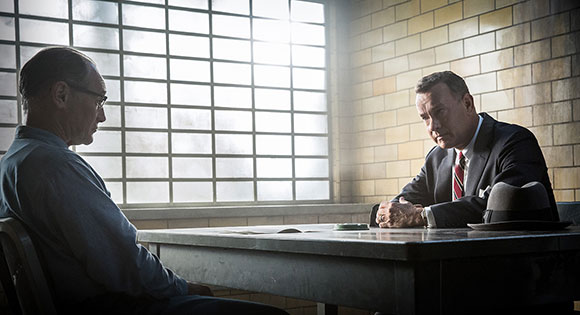 Much to the anger of Commie-hating bigots and the consequent dismay of his wife, who fears for the safety of their children, Donovan pokes some holes in the government's case. He then manages to convince the judge to avoid giving Abel the death penalty because he could prove useful in a prisoner-of-war swap with the Russians somewhere down the pike.

There are some very tender moments between Donovan and the Russian that are familiar to all of us who love and cherish Spielberg's essential respect for the humanity of all people. Abel is touched by his lawyer's courage in going against the paranoid and vengeful mood of the nation. He sees Donovan as a man who stands tall, thanks to his principles, idealism, and determination to do the right thing. 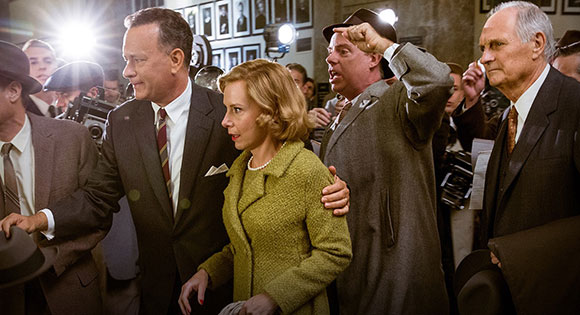 When American jet pilot Francis Gary Powers (Austin Stowell) is shot down in the Soviet Union and imprisoned for espionage in 1960, Donovan is sent to Europe to explore the very situation he predicted: a prisoner-of-war swap. In Berlin, he witnesses a wall being built by the East Germans to divide the city and later he sees German soldiers shooting down civilians trying to scale the barrier and escape to freedom.This last part of Bridge of Spies is packed with details regarding the American's negotiations with the Russians and the East Germans, the many disagreements between the lawyer and his CIA contact (Scott Shepherd), and the clash between the three nations as they try to save face in the international community. At one point, the danger of Donovan's position is reflected in the loss of his coat to a band of roving youth. 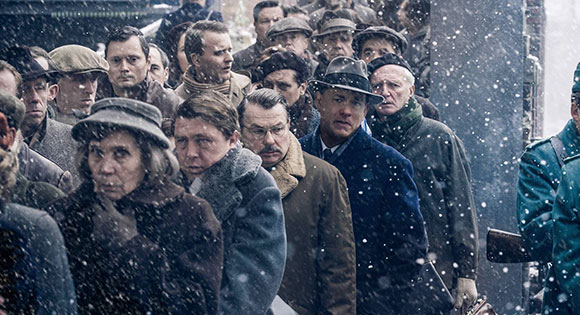 Screenplay writers Matt Charman and Ethan and Joel Coen have a treasure-trove of characters and happenings to probe. Spielberg mines meaning out of the culture of the 1950s and presents a terrific portrait of an American hero whose zeal for justice is awesome!