Directed by Ramin Bahrani
A hard-hitting morality play about foreclosures, the pursuit of wealth, and the courage it takes to do the right thing.

Ramin Bahrani, a first generation Iranian-American, began his string of socially-conscious films with Man Push Cart, an unforgettable portrait of a Pakistani pushcart vendor trying to keep his soul alive on the congested streets of New York City. That was followed by Chop Shop, a poignant and heart-affecting drama about a 12-year-old Latino orphan who fights to survive as one of the many forgotten poor in America. Bahrani left the busy city streets behind in Goodbye Solo, a compelling story about compassion set in Winston-Salem, North Carolina. At Any Price, his fourth film, was an engrossing drama about a farm family's struggle when big business, new technology, and genetically modified seeds are the name of the game.

In each of these films, the director managed to pose questions of justice, equality, and cultural criticism. 99 Homes follows in that train. It depicts the devastating fallout from the economic meltdown through the frequency of house foreclosures. The drama is set in Orlando, Florida, where Dennis Nash (Andrew Garfield), a construction worker loses his job and is not able to find other work. 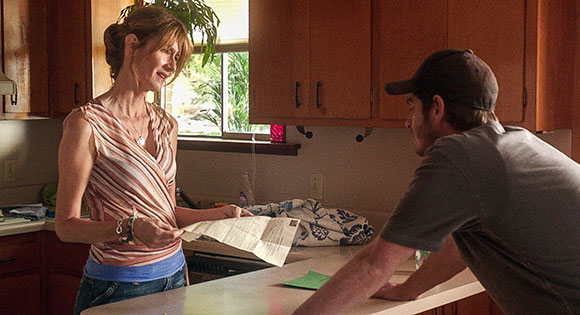 Rick Carver (Michael Shannon) is a licensed real estate broker who is employed by the banks to enforce foreclosures, getting people and their belongings out of homes so they can be resold. A firm believer in "cowboy capitalism," he is unfazed when one of the men on his list kills himself. "I can't bring him back to life," he says, and that sums up his look-out-for-number-one attitude.

Nash, his mother (Laura Dern), a hairdresser, and Nash's young son Connor (Noah Lomax) have lived in the same house for all his life. But they have fallen behind on their mortgage payments. When Carver and some sheriff's deputies show up, they announce that "this house is owned by the bank." In an emotionally explosive scene Dennis and his mother unsuccessfully plead for more time, saying they plan to appeal the court mandated eviction. Given only a few minutes to gather their belongs, they watch in despair as their things are piled on the curb. Within fifteen minutes, Nash's hopes and dreams for the future vanish. He is forced to take his loved ones to a motel down the road populated by other families who have endured foreclosures. 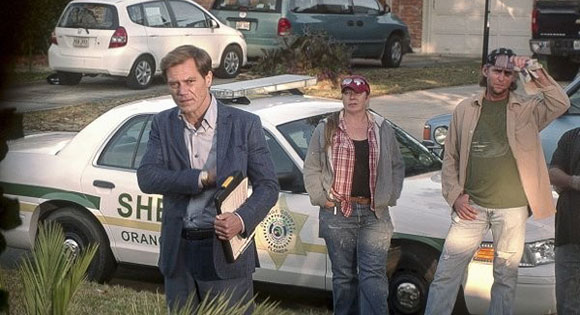 The next morning, he finds that his construction tools have been stolen. He goes to confront Carter's team and ends up taking on an assignment for Carter than none of them want to do. The wheeler dealer is impressed with his construction skills and hires him for special projects on foreclosed homes, including removing air conditioners and appliances in order to cash in when they are replaced.

Hired as Carter's right-hand man, Nash is soon making a good percentage of his boss's profits on various schemes. He also begins going with the police to conduct evictions. His keeps this a secret his mother and son. His dream is to get back the family home but when he can't do that, he sets his goal even higher and purchases a larger house with a swimming pool. 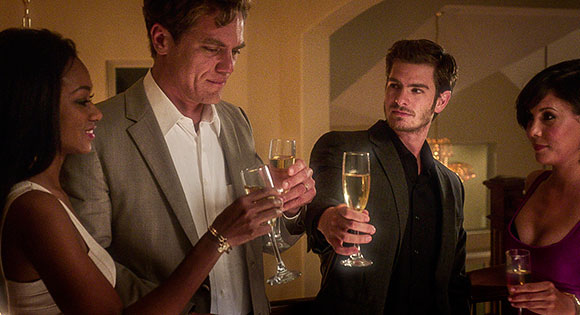 Carver's winner-takes -philosophy enables him to cheat the government and the banks. As time passes, he acquires and resells more and more houses, seeing them as nothing more than boxes. Although warned by his boss -- "Don't get emotional about real estate" -- Nash continues to empathize with the anger, grief, and humiliation of the families he is evicting. It is this empathy that spurs him to ethical action.

Bahrani has fashioned a hard-hitting morality play that hammers home the rifts in society being caused by the gap between the rich and the poor. Working-class and middle-class people have been shafted again and again by the rich and their hired hands. The obsessive pursuit of wealth is a cultural force that is applauded by the media and even baptized in certain religious circles. 99 Homes lets the air out of that balloon.

R - language including some sexual references, and a brief violent image