Directed by Jay Roach
An ethically stirring biopicture about the courageous screenplay writer who triumphed over the Red Scare crusaders of the 1950s.

Fear and dread are afoot in America once again as the public veers toward a steady state of paranoia over terrorism and mass shooting sprees. During the 1950s, the country was caught up in the Cold War and Red Scare. Congress responded with the House Un-American Activities Committee. Among many that they investigated were ten Hollywood screenplay writers. In Washington, D.C., they were grilled by zealous members of the Committee, but the writers refused to answer questions about their politics or to incriminate their friends.

Consequently, the Hollywood Ten were sent to prison for contempt of Congress. Walter Bernstein who wrote the screenplay for The Front notes the fallout from this blatant violation of First Amendment Rights: "It was a terrible, terrible time. Children of blacklisted actors were jeered in school as 'Red Communist bastards,' marriages broke up, careers were wrecked, financial ruin fell upon many." 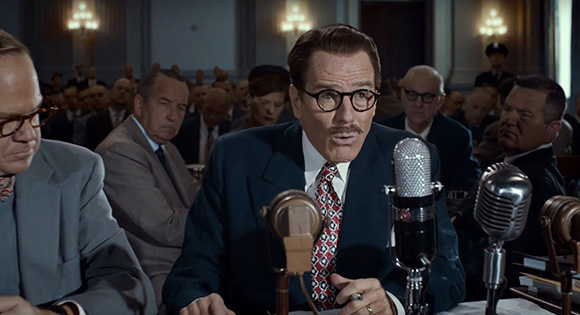 Trumbo is a riveting biopicture directed by Hal Roach about the life and work of perhaps the most well-known of these writers, Dalton Trumbo (1905-1976). The screenplay by John McNamara is based on Bruce Cook's 1977 biography of this controversial figure. This film boldly speaks out against the egregious abuses of the Red Scare and the damage done by right-wing politicians' crusade against those they considered to be traitors to the homeland.

Bryan Cranson delivers an Academy-Award-caliber performance of Trumbo, showcasing his character qualities as an idealist, a freedom of speech advocate, a loyal friend, a devoted family man, a focused screenplay writer, and a thick-skinned survivor. 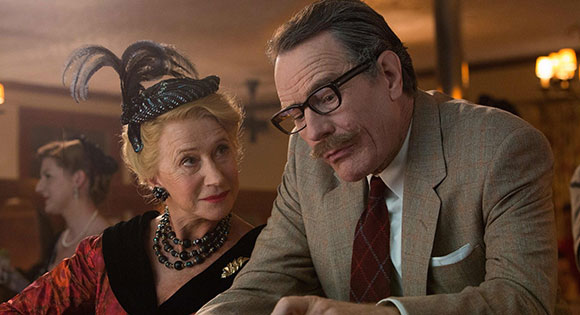 By 1940, Trumbo has established himself in Hollywood as a writer with the talent and speed required to resurrect troubled projects. By the end of World War II, he is the highest-paid screenplay writer in the film industry. After refusing to answer questions or co-operate with the House Un-American Activities Committee, Trumbo serves time in prison. Upon his release, he finds he has been blacklisted and none of the studios will hire him. They have caved in to political pressure, the paranoid ravings of L.A. Times gossip columnist Hedda Hopper (Helen Mirren), the patriotic posturing of actor John Wayne (David James Elliott), and others. Unable to sell work under his own name, Trumbo goes to work for the King Brothers (John Goodman, Stephen Root) cranking out B movies; he gives some of his friends, including Arlen Hird (Louis C.K.), who is more political than he is, writing assignments during this period. 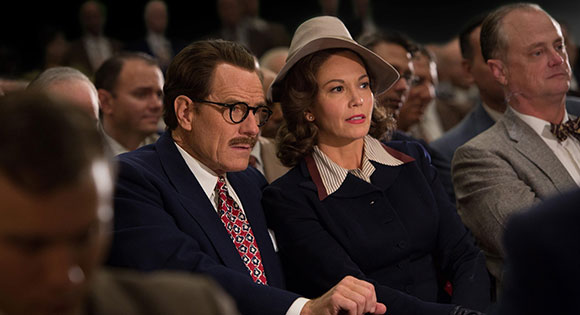 The tensions caused by working around the clock almost costs Trumbo his marriage to his loyal and long-suffering wife Cleo (Diane Lane) and the adoration of his daughter (Elle Fanning). The entire family rejoices when he wins two Oscars for screenplays delivered under false names: Roman Holiday and The Brave One. Thanks to the moral support of actor-producer Kirk Douglas (Dean O'Gorman) and director Otto Preminger (Christian Berkel), Trumbo is finally given screen credit for his contributions to Spartacus and Exodus. By the 1960s, the blacklisting crusade is over. Trumbo fought the system and triumphed.

Special features on the DVD include Who is Trumbo?; Bryan Cranston Becomes Trumbo.