Where to Invade Next

Directed by Michael Moore
A creative and inspirational documentary meant to revive the American Dream by showing us examples of where it is alive and well.

Michael Moore has proven himself to be a great believer in the American Dream. His documentaries have dealt with some of the major issues of the day, including the country's infatuation with guns (Bowling for Columbine), the war on terror (Fahrenheit 9/11), health care (Sicko), and economic turmoil (Capitalism: A Love Story). Underneath the cultural criticism that has been at the core of his work is a yearning for a more humane, fair, peaceful, and progressive nation. What changes would help revive the American Dream? What images of the future could pull the United States out of its enslavement to war (60% of federal taxes goes to the military) and fear (it permeates our waking hours and punctures the hopes we have for a brighter future).

Moore begins by noting that America has invaded over 100 countries but has not won a war since World War II, having been defeated or stalemated in Korea, Vietnam, Lebanon, Iraq, Afghanistan, Syria, Libya, Yemen, and a few other places. Isn't there a better way to spend the citizens' hard-earned money than on the works and the weapons of the Pentagon? In a playful scene, Moore tells the nation's military leaders that they should let him lead the next invasions. He'll find and capture for the U.S. the ideas that work best in other nations and help their citizens flourish and exude happiness. "We have problems," he asserts, "no army can solve." 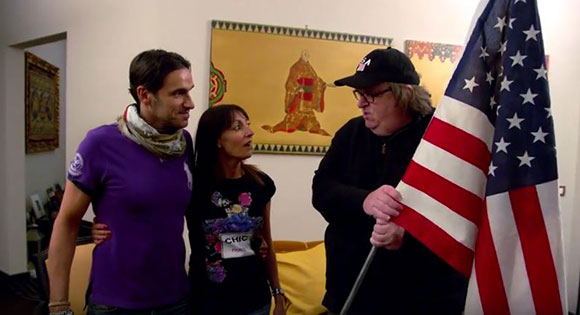 In Italy, he visits with a contented couple who make the most out of the 8 weeks of paid vacation they have each year, plus their two-hour lunches. He interviews some Italian CEO's who back this schedule because it makes workers to be more relaxed and committed to their jobs. Then Moore learns that Italians have even more time off thanks to national and religious holidays, 5 months of paid maternity leave for mothers, and 15 days of paid honeymoon for those who get married. When the Italian couple learns that in many American workers are not entitled to any weeks of paid vacations, they are understandably shocked.

In France, even students in the poorest schools are served healthy and nutritious meals in the cafeteria. They learn to eat well, drink water, and serve each other. These well-fed kids wince at pictures of the muck most of their peers in America eat for lunch. In addition, French teachers are doing a better job teaching sex education as proven by lower pregnancy and STD rates than in the U.S.

Moore finds more good European ideas when he travels to Finland whose top-rated schools credit eliminating homework and stressing a holistic approach to learning as keys to their phenomenal success. Teachers there point out the inadequacy of standardized tests in measuring student abilities. "School," says one math teacher, "is for finding out what makes you happy." Adds the principal, "I want them to play." Later, in Slovenia, Moore's mouth drops open as he learns about this country's free university system paid by the government; it is attracting students from around the world. 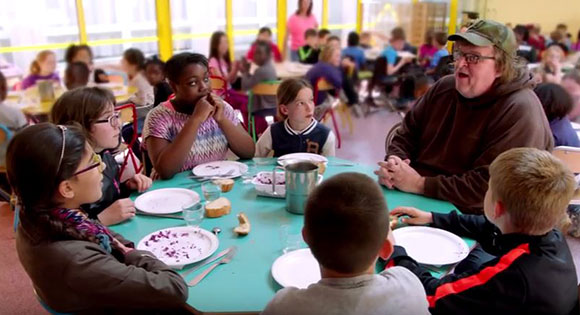 In Germany, happy workers at a pencil factory work only 36 hours a week, are members of the board, and are sent to spas to chill out whenever they are stressed. And in German schools, the Holocaust is studied so that students understand what their predecessors did. Moore wonders what a difference it would make if American education acknowledged the country's dark side. He suggests that the first step to recovery would be to admit "I am an American, a great country born in genocide and built on the backs of slavery."

In Portugal, drug use has been decriminalized whereas in the United States the war on drugs has resulted in the incarceration of a huge number of black men. Portuguese policemen criticize the barbarity of capital punishment in America.

In Norway, a prisoner makes a good case for capping jail time at 21 years in his homeland which has one of the lowest murder rates in the world. In those jails, the guards do not carry weapons. Their goal is rehabilitation, not revenge. A warden reminds Moore that the idea of "no cruel or unusual punishment" came from the U.S.

Moore discovers that women are doing better outside the U.S. He listens to women in Iceland who have risen to positions of power in government and business. And in Tunisia, a Muslim North African country, he learns that women there can receive free health care and government-funded abortions. In January 2011, Tunisia passed legislation to guarantee equal rights for women.

"The American Dream was alive everywhere except America."
— Michael Moore in Where To Invade Next

Women's rights, like so many others ideas Moore finds manifested in Europe, were once American ideas. And they could still be implemented in the U.S. if only our leaders and citizens would shuck the mania for exceptionalism and seeing ourselves as "Number One." Moore has provided a workable number of images of the future that, if put into practice, could revive the American Dream.

We need to move on and leave behind the pessimism, hopelessness, and helplessness that continue to sap our spiritual energies. We are grateful to Michael Moore for this patriotic and inspirational documentary!