Directed by Andrew Bujalski
A creative comedy about two physical fitness pros and an out-of-shape client who spurs them on to fresh possibilities.

In a "Gym Meditation" in his book Flip the Switch, Eric Harrison points out that it's important when working out to listen to our bodies:

"People usually do sets of ten or twenty reps on a certain machine, but this number is unlikely to be what the body needs. The perfect point to stop could be after eight reps or seventeen, on any particular day, depending on your energy levels. You have to be focused to catch that point. Your muscles will tell you when enough is enough if you listen to them. This can keep that enjoyable movement from degenerating into strain and tension."

There's plenty of strain and tension in this creative comedy. Trevor (Guy Pearce) is the owner of the Power 4 Life gym in Austin, Texas. He's a positive thinking man who dreams of expanding to a much larger facility with many more services. He is also a zealous believer in wellness which he sees as having physical, mental, emotional, and spiritual dimensions.

Kat (Cobie Smulders) is Trevor's most popular personal trainer. She is a very competitive and driven young woman. She and Trevor have been lovers but they did not carry the relationship much further than that.

Danny (Kevin Corrigan) is a recently divorced New Yorker who has inherited a large fortune from his mother. He has rented a McMansion and spends his time puttering around his house entertaining himself. He visits the Power 4 Life gym and listens to the enthusiastic pitch from Trevor. Danny signs up for a training package and is very pleased when Kat shows up at his home to help get him in shape. 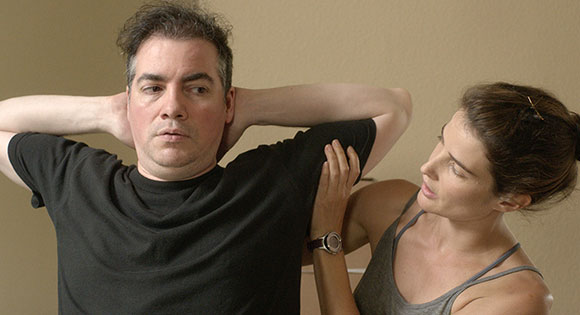 Results is a quirky film written and directed by Andrew Bujalski with three colorful characters who clash and intermingle in surprising ways. For example, Kat goes to bed with Danny, and Trevor is rather disillusioned when he visits his idol, a nasty Russian "kettle bell master" (Anthony Michael Hall). Both of these incidents are totally unpredictable. And although Danny doesn't put much effort into his goal of learning to take a punch, he is smart enough to see that underneath their spandex leotards and near-perfect bodies, Trevor and Kat are "hard-bodied rageaholics."

Bujalski likes all three of these characters and sends them happily on their way to a transformed future of even more surprises.