Directed by Gerard Barrett
A moving drama that reveals the struggles of a compassionate caregiver at the end of his rope.

Being a caregiver is both a challenging and a fulfilling spiritual practice. You may be assisting a loved one through a rough period after surgery or an illness. You may be involved with someone with a long-term disability. You may be living with someone with an addiction. There is no universal way to describe what happens when we show up and find ourselves looking after another human being. We would like to think that we can take control of the situation but, in fact, caregiving often slides away from our plans and expectations.

In this enthusiastic recommendation of Glassland, we take a hard look at a good-hearted young man who cares for his alcoholic mother in Ireland as best he can. To tap into the deep and enlightening themes of this film, which was written and directed by Gerard Barrett, we have used William and Nancy Martin's superb paperback book The Caregiver's Tao Te Ching: Compassionate Caring For Your Loved Ones and Yourself. We have chosen some of its poetic passages to probe the soulful insights that arise in the relationship between the two lead characters in Glassland.

"Opening ourselves to another person
is like releasing a river of compassion.
The gentle heart has the power
of a rushing stream.
In the presence of another's need,
our spirit remains supple and fluid.
Our flexible nature dissolves
the rigid structures of fear."

John (Jack Reynor) is a Dublin taxi driver who barely scrapes by. He lives with his alcoholic mother Jean (Toni Collette). The caregiving roles in this family have been reversed. As a young adult, he is caring for his parent who one day can be found lying in the street and another time is discovered unconscious in a stream of her own vomit.

In the presence of Jean's needs, he tries to keep his spirit supple and fluid. But it is not easy. Early in the film, John rushes her to the hospital and is told by a doctor that if she doesn't get a liver transplant, she will probably die soon. Fear takes hold of this disciplined son who loves his mother but feels helpless in the face of her alcohol addiction. Returning from the hospital, Jean screams in frustration, "Where are theeey?" as she looks through the house for her booze.

"Everything in the universe is uniquely itself
yet is also part of everything else
and depends on everything else.
There is no independent existence.
In caring for another person,
we ourselves are cared for." 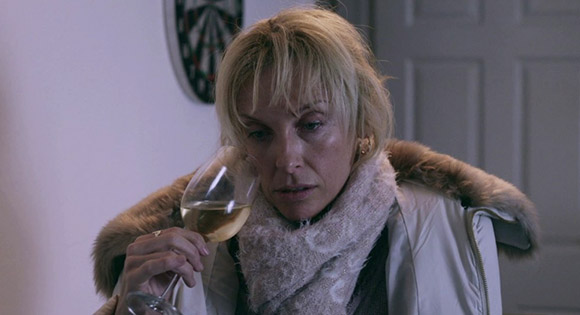 There is nothing in a caregiver's life that does not have a connection to the person he or she looks after. In an honest and poignant outpouring of his anger, disappointment, and helplessness, John reveals how much he loves and misses his mother from yesteryear. Instead, all he now sees is a self-destructive monster who only thinks of herself and sating her addiction.

Jean responds later by telling her son how her life and hopes for the future were shattered when she gave birth to a Down's Syndrome son named Kit (Harry Nagle) who has been institutionalized. Her husband then walked out on her leaving her to raise her children alone. She still refuses to visit Kit.

"You cannot give another person joy,
for joy has never left her.
It is what is always there
beneath the struggles and the pain,
hidden,
but never absent.
You cannot make another person see it.
You can only see it for yourself.
The more you see it in all things,
the more she sees it in herself."

John searches for snatches of joy and is surprised when they just happen at random. He has some fun cavorting with his best friend Shane (Will Poulter) playing video games. In perhaps the most joy-filled scenes in Glassland this tender-hearted young man watches his mother dance to "Tainted Love" and another time dances with her, knowing how much she misses this part of her life from the past. As they move around the room together, we were reminded of the equally loving scene in James White when a young man holds his dying mother and offers her images of the future that she can cherish.

"Caring for another person
seems an awesome task;
yet we do it without effort.
Small events of the day
are fascinating to us.
Difficult moments reveal to us
our own authentic kindness.
Complicated tasks are seen
as a series of simple steps.
Fatigue is just a tired feeling,
free of stories and dramatic meaning.
In the midst of this work,
we find that many mental habits
that used to cause us suffering
have simply disappeared." 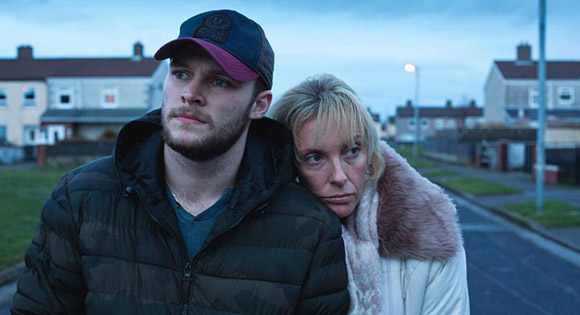 After convincing Jean to enter a treatment program, John is forced to gather the money he needs to keep her there. But this gets him deep into a difficult situation where he must decide whether to become involved in another kind of caregiving.

During her many years of loneliness and depression Jean turned to alcohol which she describes as "a silent friend, a friend who would never hurt me, who always made things better if only for a little while." Can John find his own source of renewal and transformation? There are only two religious images in Glassland: one is a Madonna and Child trinket in his cab and the other is a scene where we see him taking in the enormousness of the sky with his head bent backwards. If you want to take these two as signs of his turning to God or Spirit, it is perfectly reasonable to do so in the context of the whole movie.

Another way of looking at the last scenes of the film is to sense that this young man's years of compassionate caring for his mother have equipped him to live responsibly in the larger world.