Barbershop: The Next Cut

Directed by Malcolm D. Lee
An inspiring film about a black South Side community that decides to take a stand against gang violence.

Barbershop: The Next Cut is the third film in this popular and always edifying comedy franchise. Calvin's (Ice Cube) establishment is a popular and well-known place on Chicago's South Side. In Barbershop he inherited the barbershop from his father who ran it for 40 years. A surprising set of circumstances enables him to see that true wealth comes from investing in others. In Barbershop 2: Back in Business, a haircutting franchise directly across the street threatens Calvin's pillar of the black community.

In this film, Calvin is feeling worn-down and frazzled by all the gang violence on the South Side. He and his wife (Jazsmine Lewis) are worried about their teenage son Jalen (Michael Rainey, Jr) who has fallen under the spell of a gang leader who promises him a wild ride of adventure. They realize that the time has come for them to make a major change in order to save Jalen. 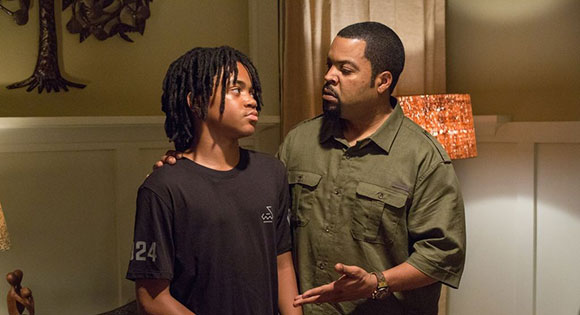 Meanwhile, back at the barbershop Angie (Regina Hall) has become Calvin's business partner and they now run a unisex shop. This development sparks many often funny discussions about sexual politics among the male and female cutters. When Dreya (Nicki Minaj) tries to seduce Rashad (Common) who’s married to Terri (Eve) this incident sparks plenty of heated discussion. Eddie (Cedric the Entertainer) can always be counted on to have the last word, whether he is commenting on the impact of a black president on the lives of blacks, Bill Cosby, Black Lives Matter, and politics in Chicago. 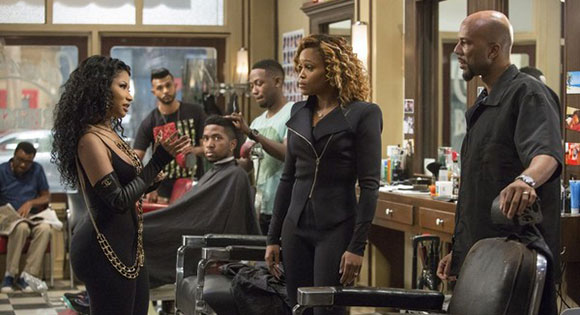 Malcolm D. Lee directs from a screenplay by Kenya Barris and Tracy Oliver which wisely mixes comedy and a sobering overview of community activism against gang guns and violence. In our review of the original Barbershop we used a quotation from Jean Vanier which seems in sync with the themes in this drama as well:

"Community means accepting people just as they are with all their limits and inner pain, but also with their gifts of beauty and capacity to grow."

At the hub of this movie is our satisfaction and respect for Calvin and his barbershop employees who demonstrate what it means to use their talents to make a difference in their community. Calvin and Rashad also are wonderful examples of black fathers who understand what their sons are going through and help them to grow.

A Reality Check
"The number of people shot in Chicago from January 1 – May 3, 2016, has already passed 1,100. Gun violence in the city is at a level not seen since the 1990s, mostly because of gang shootings."
— The Chicago Tribune