Directed by Laura Bispuri
A slow-moving and meditative drama about a young Albanian woman's transgender journey living as a man.

Hana (Alba Rohrwacher), who is in her late 20s, has been given the freedom to pursue a new gender identity by an Albanian tradition that has been going on for more than 200 years. In a tribal culture that is rigidly patriarchal, she has become a "sworn virgin" who is allowed to take on the rights and responsibilities of manhood in the community, including carrying a weapon, buying or owning property, and smoking and drinking with men in places where women are not allowed. Taking the name Mark, she vows that she will practice lifelong chastity and never marry.

Through flashbacks, we see how she has come to this decision. She is brought to the rural community after her parents die by an uncle, Stjefen (Luan Jaha). His daughter Lila (Flonja Kodheli) is like a sister to her. The girls learn what women cannot and can do, and eventually Lila is married and moves to the city. Mark stays behind. We see him in the background at Stjefen's funeral where the men of the community chant in front of the open casket.

Fourteen years later, feeling the need to make contact with Lila, Mark travels to Milan, Italy. He is treated kindly by Lila's husband who helps him find a job and an apartment. Lila's daughter Jonida (Emily Ferratello) is at first ill-at-ease with this stranger but she begins to take an interest in who he really is. 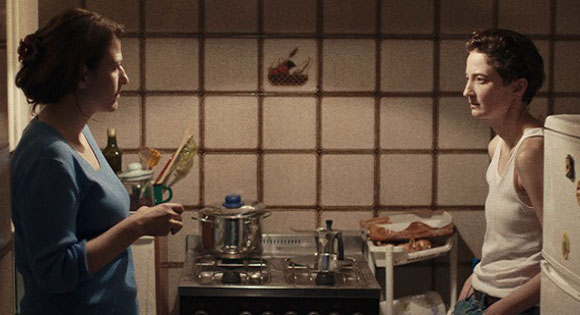 Laura Bispuri directs this slow-moving and meditative drama about a young Albanian woman's transgender journey of living as a man. It is based on a novel by Elvira Dones which provides a multidimensional probe of the tribal Albanian practice of becoming a "sworn virgin."

We witness the gradual unfolding of Mark's yearning for a different way of life in Italy, especially as he renews his relationship with Lila and develops a friendship with her daughter. The film vividly succeeds in conveying this young man's desire for acceptance, kindness, and sex while underplaying his verbal responses to his new life in the city.