Directed by Musa Syeed
A parabolic film about a Somali refugee who lives on the streets of Minneapolis with his devoted dog.

According to the 2010 American Community Survey, there are approximately 85, 700 Somalis in the United States and 25,000 of them live in Minnesota. The largest concentration of them is in Minneapolis. Writer and director Musa Syeed has chosen to focus on the spiritual journey of one of these immigrants and his struggle to survive.

Adan (Barkhad Abdirahman) finds himself homeless after his mother accuses him of stealing her jewelry and some friends kick him out after he accidentally causes the death of a pet bird. Seeking both faith in God and in himself, Adan seeks refuge in a local Da'Wah Center. The Imam (Hassan Ali Mohammed) agrees to let him sleep there in exchange for doing some chores around the place. Adan steals money from the Center but gives it back. 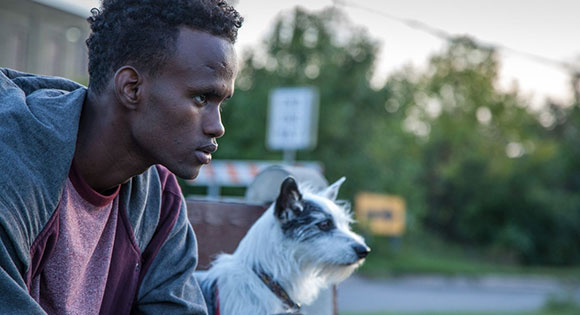 Faisal (Jamaal Farah), a zealous Muslim, gives him some new clothes and a job delivering food from his restaurant. On his first assignment, Adan hits a dog. He intends to take him to a shelter, but first he returns to his workplace. But Faisal is outraged to have the animal in his place; some Muslims believe that the saliva of dogs is unclean. Adan decides to call his new companion Laila, and he carries her with him in a sports bag.

The only thing saving him from starvation is the money he receives from Knudsen (Christina Baldwin), a FBI agent who recruits him to report on Somalis who might be involved in terrorist activities. He eventually abandons this job and looks for help from Munira (Ifrah Mansour), a young woman who works in Social Services. But Laila turns out to be the most reliable and genuine loving presence in his life on the streets. 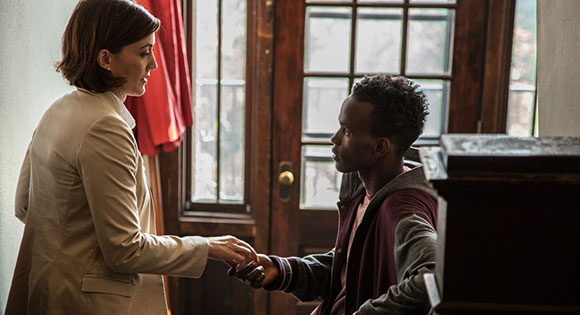 It is not easy to convey the challenges to his faith in God that Adan undergoes in his encounters with the men and women in his refugee life.
Barkhand Abdirahman, who was so impressive as one of the modern-day Somali pirates in Captain Phillips, gives another standout performance here. In a poignant scene in this parabolic film, the Imam tells Adan and Faisal a story about the Prophet Muhammad that affirms the love and kindness believers can show toward animals. Equally moving are the prayers of this Somali immigrant who sees meaning and hope in his quest as a lost soul seeking spiritual solace. Here is one of them.

"We've all strayed.
cut off from you—
From where we were,
from who we were,
wandering the world,
we have so little time to
find our way.
I'm as lost as anyone.
But please know that I am trying.
that I am on a path,
the best that I can find.
And here
in the dirt
in the sun
in the wind
on my way to you —
I am home."