Directed by Denis Villeneuve
An adventuresome sci-fi thriller about the race to communicate with intelligent alien life to avert disaster.

Are we alone in the universe? Slightly more than half of people in the United Kingdom, Germany, and the United States think that intelligent alien life exists. A 2015 poll conducted by the market research company YouGov found Germans are most likely to believe, at 56 percent, followed by Americans and British, at 54 and 52 percent, respectively.

Those who believe greatly outnumber the people who definitely do not; at most, just under one-third of people in Germany assert that there is no intelligent life outside of Earth, while only around one-quarter of respondents in the other countries said the same. One-fifth of Americans and British said they didn’t know one way or the other.

The idea of extraterrestrial life is presently ranging quite broadly in both our individual and collective consciousness. Here are a few indicators of this cultural phenomenon:

This brings us to the latest movie about intelligent alien life: Arrival. It takes place in our time or the near future. Twelve alien spacecraft, shaped like elongated eggs, land at twelve different places around Earth. As various governments try to decide what to do about them, the public panics; there are reports of riots, looting, and suicides. The U.S. government realizes that this "alien crisis" must be dealt with swiftly. 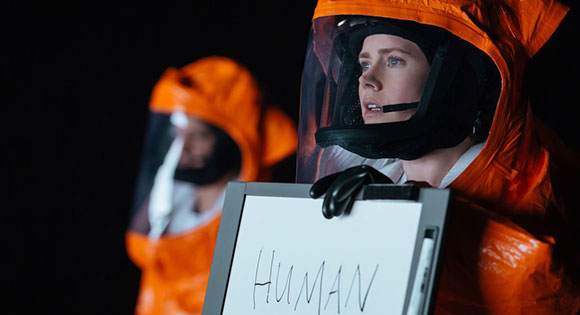 Colonel Weber (Forest Whitaker) calls upon Dr. Louise Banks (Amy Adams), a linguistic professor. Previously she had successfully translated some Farsi documents for the military and already has a top secret security clearance. They now need her to travel to Montana and converse with the aliens. What do they want? Where are they from? How did they get here? The other members of her team are Ian Donnelly (Jeremy Renner), a theoretical physicist, and Halpern (Michael Stuhlbarg), a CIA agent.

Language is the first weapon drawn in a conflict. It is the glue that holds a civilization together. It is the cornerstone of peaceful coexistence. And according to one scientific theory — the Sapir-Whorf hypothesis — we can actually rewire our brains when we immerse ourselves in another language.

These truths inform Louise's approach to the aliens. She knows that communication is bound to be slow given the complications stemming from the fear, tension, and uncertainty involved in interspecies encounters. But this divorced woman brings additional qualities to this challenge: the deep emotions of openness, respect, and vulnerability that she is experiencing in her grief over the death of her 12-year-old daughter Hannah from a rare incurable disease.

Louise and Ian enter the alien Shell and walk up to a wall. Beyond it are two gigantic creatures with seven tentacle-like feet; the team calls them heptapods and Ian nicknames them Abbott and Costello. Unable to understand the sounds they make, Louise realizes that written language will be a key to communication. At first, the linguist is baffled and intrigued by the circular hieroglyphs emitted by the aliens. She and Ian map differences between the circles and match them to English words. 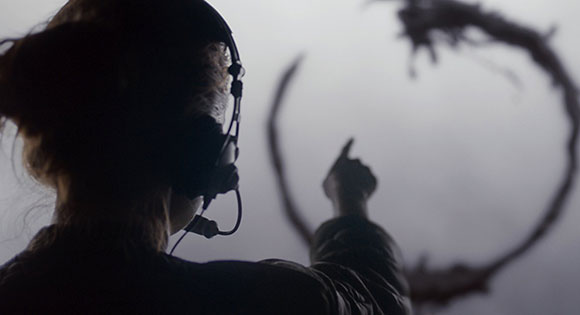 We realize, however, that more is implied by this language than words. It conveys some truths about nonlinear time, beginnings and endings, and the connections between things. We were reminded of the Zen Buddhist practice of drawing a circle in one stroke and one breath. Phil Cousineau explains this tool in his Transformative Travel e-course: "It is believed that this one intuitive and uninterrupted brushstroke reveals your character at the moment of execution, and for that reason has been used for centuries by teachers, writers, artists, people of all walks of life, to center yourself and also reveal where you are on your life's journey." Certainly, Louise's experience with this circular language affects not only how she thinks, but her understanding of life and reality.

Dennis Villeneuve (Incendies, Sicario) directs this sophisticated sci-fi thriller that emphasizes character development and emotional literacy over fast action sequences, special effects, and the worn-out philosophy of dualism. One of Louise's challenges is to convince leaders of the nations with the other eleven Shells, some longtime enemies, to collaborate, share what they have each learned, and agree to a unified approach to the aliens. 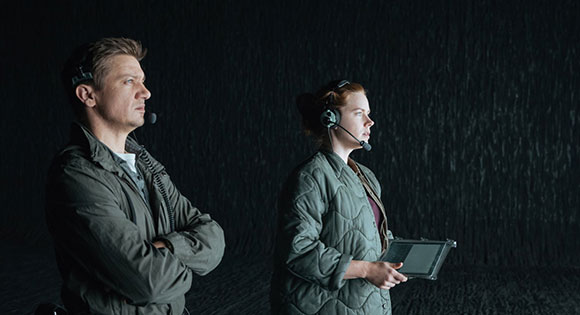 Arrival's screenplay is by Eric Heisserer based on the short-story Story of Your Life by Ted Chiang. The spiritual thrust of this sobering drama is its thematic embrace of dialogue as a habit of the heart that involves reverence, compassion, openness, and deep listening. Amy Adams in a solid and nuanced performance models these virtues in her encounters with the two aliens. The other theme given a workout in Arrival is the importance of time as a portal of change and refreshment.