Directed by John Musker, Ron Clements
The quest of a young Polynesian girl to become a way-maker for her people.

In this family-friendly CG animated adventure, Moana (voiced by Hawaiian newcomer Auli'i Cravalho) is the daughter of the chief of a beautiful Pacific island; she is being groomed to be his successor. But she feels called to a mission which he opposes — to lead her people into a seafaring life of moving from island to island. Moana's free-spirited grandmother encourages her to listen to the voice inside her and to venture out into the mysterious waters beyond the shallow reef to find her destiny. As she heads out to sea, she discovers a stowaway on her boat, a funny and clumsy rooster with robotic moves. 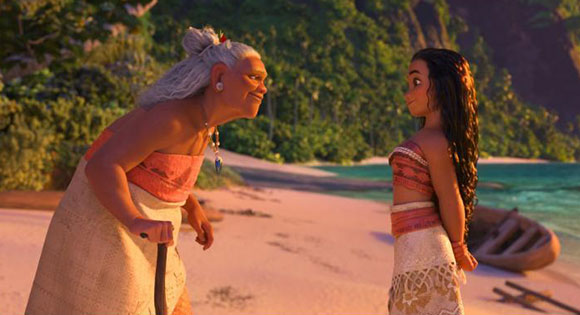 Moana's quest has another goal. She needs to find a demi-god named Maui (Dwayne Johnson), who has stolen a "heart" from an island goddess, an act that is now bringing blight and destruction to her people. She has to convince him to return the heart, but first she agrees to help him retrieve his missing magic hook in the Realm of Monsters. Initially suspicious of her, the heavily tattooed Maui is impressed with how the ocean protects her, and he teaches her to sail. Together they battle a band of coconut pirates and then face down a fiery mountain. When push comes to shove, he proves to be strong with his fishhook and gift for shape-shifting into a giant eagle. 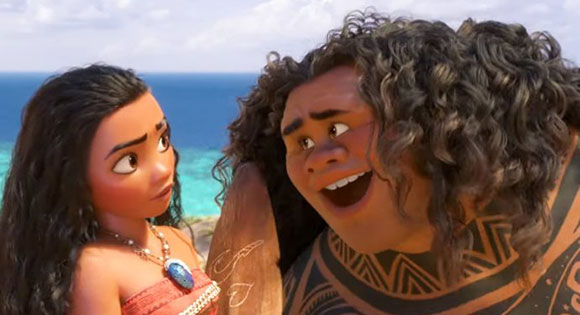 Hats off to directors John Musker and Ron Clements for creating such a visually exciting and thematically rich story. We were also impressed with the melodic songs by composer and lyricist Lin-Manuel Miranda, Mark Mancina, and Opetaia Foa'i. But the real kudos go to the new Disney heroine Moana, a resilient, patient, and noble girl whose quest transforms her into a wise leader of her people. It is fitting that she becomes "a way-maker" who fulfills her dreams.