Troy (Denzel Washington) is a troubled middle-aged African American who lives in a small house with his wife Rose (Viola Davis). They have been married for 18 years and have two sons: Cory (Jovan Adepo), a very talented high school football player who has dreams of attending college on an athletic scholarship, and Lyons (Russell Hornsby), the eldest who is unemployed and spends much of his time playing in a jazz band. Both sons do not have a very high opinion of Troy, and it irks him that they do not show him the proper respect.

As a boy, Troy suffered abuse and beatings from his father and without a mother to nurture him in love and compassion, he became emotionally insensitive to those closest to him. He quit school and left home when he was 14. Unable to deal with his anger and depression, Troy robbed a bank, killed a man, and spent 15 years in prison. 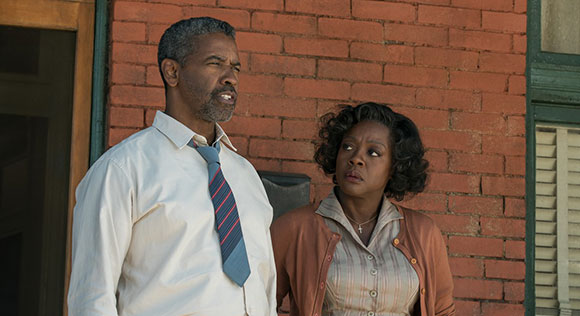 Afterwards, he experienced the only stretch of life where he was truly happy and fulfilled. Troy played baseball in the Negro leagues and was hailed as a home-run champion. Down through the years he has regaled family and friends with stories of his glory days. But right alongside these positive memories are Troy's view that he was denied a chance to play pro ball because of his color. 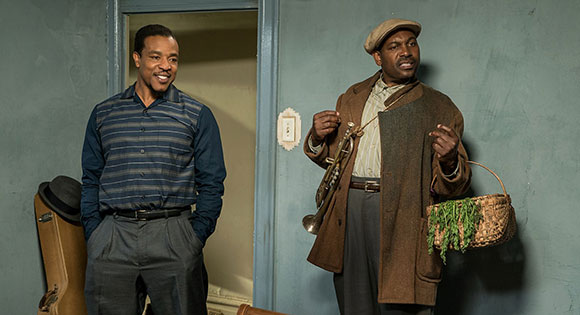 Troy and his son Lyons
"You can't change me, Pop. I'm 34 years old," Lyons confides to his father. "If you wanted to change me, you should have been there when I was growing up."

Troy is very pleased with himself after he convinces his boss to let him become the first Negro employee to drive a sanitation truck. He's worked hard to support his family, which is why it's so hard for him to accept that Lyons has not found a regular job and devotes his time to playing music. Nearly every Friday payday, Lyons comes over and asks Troy for some money; it's always a difficult conversation between father and son. Although Lyons repeatedly invites his father to hear him play at the club, the old man never comes. This does not sit well with Lyons who describes his music as the reason he gets up every day. 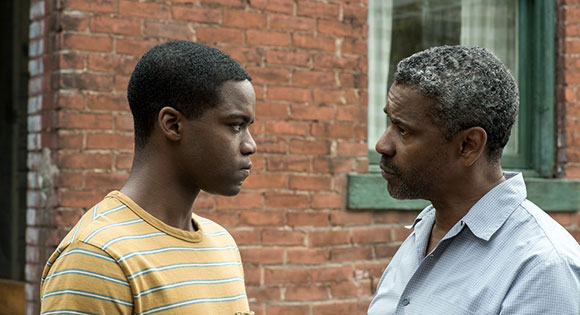 Troy and his son Cory
"You live in my house, fill your belly up with my food, put your behind on my bed, because you're my son," Troy tells Cory. But does the father "like" his son." Troy answers, "It's my duty to take care of you. I owe a responsibility to you . . . and liking your black ass wasn't part of the bargain. Now don't you go through life worrying about if someone like you or not. You best be making sure they're doing right by you."

Whereas Rose is hopeful about Cory's future in athletics, Troy is convinced sports will get him nowhere. He tries to bend the boy to his will and elicit his surrender. Every time they meet in the back yard, where Troy is building a fence, they end up shouting at the top of their lungs at each other. Part of the problem, which Rose tries to tell her husband, is that he's not kept up with all the changes happening in the world.

In one close encounter, Troy orders Cory to get a trade — "something that nobody can take away from you." But all Cory really wants from his dogmatic father is love and encouragement to follow his dreams. He's convinced this won't happen. "You ain't never done nothing but hold me back," he accuses his father." All you ever did was to make me scared of you."

The Play and the Actors
Fences unspools like a film of a stage play; it has only a few sets and a lot of speeches. But this is hardly a drawback. August Wilson's poignant play was awarded a Pulitzer Prize in 1987 and the Tony Award for Best Play in 1987 and the Tony Award for Best Revival of a Play in 2010. The 2010 production starred Denzel Washington and Viola Davis as Troy and Rose, who both won acting Tonys. Kenny Leon who directed the 2010 revival said of the protagonist: "There is not a character — definitely not in the theatre -— that is on the scale of Troy — he is Othello, Macbeth, and Willy Loman combined."

The actors are again at the top of their form in the film. Denzel Washington stokes the fire in his belly and gives a standout performance as a natural storyteller, the last angry man, the sanitation worker, the son with a father who beat him, the home-run hitter, the honest and direct man, the undisciplined drinker, the critical husband, the womanizer, the black man hobbled by middle-age disappointments, and the father who has failed at winning the love and trust of his two sons.

Troy is so out of touch with the emotions and feelings of others that he has no clues about the little ways he hurts those closest to him. He tries to take care of his mentally challenged brother, but ends up putting him in a home. He even alienates his longtime buddy Bono (Stephen Henderson) after they talk about how Troy is hurting Rose.

Viola Davis is outstanding as Rose, a woman who loves her husband and has stood by his idiosyncrasies over the years. She tries to gently push him into a better relationship with their sons, and when he complains about his life, she reminds him that she's been right there with him through all the frustrations and pain. She admits to one of the boys that "He filled up the house. My first mistake was that I didn't make him leave room for me."

Those who live with or have survived difficult family dynamics will empathize with one or more of these characters. You will find yourself reaching for a pen to write down a key line or two. And you will easily understand why we have chosen Fences as one of the Most Spiritually Literate Films of 2016.