Beauty and the Beast

Directed by Bill Condon
A wonder-filled live-action version of the romantic story that also offers us lessons common in good fairy tales.

The long-awaited live-action version of Beauty and the Beast is now in theaters. The 1991 animated interpretation of the eighteenth century fairy tale has long been a favorite of families. This new one is even more delightful with wonderful performances by the live and voice actors and over-the-top musical numbers. It reminds us of old-fashioned musicals with Busby Berkeley-like dance numbers and at least one The Sound of Music-like song delivered from a hilltop with swelling orchestral accompaniment. The soundtrack includes the original songs by Alan Menken and Howard Ashman plus three new numbers by Menken and Tim Rice.

At times, the movie feels a bit too much, especially to viewers whose sensitivities are more attuned to dramas. Like today's action flicks, it assaults the senses from all directions. Yet, who can't help smiling and marveling when a castle-full of animated objects invite the heroine to "Be Our Guest." As a fellow film reviewer and friend Stephanie Zacharek wrote in Time, "But how about those napkins, undulating and writhing in the air like enthusiastic Martha Graham understudies? Somebody had to dream that up. The human mind is truly a miracle." The songs are imaginatively staged and often wonders to behold. 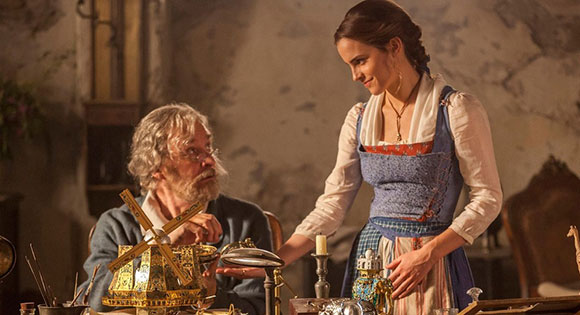 The story follows closely the plot of the previous version. Belle (Emma Watson) is considered quite odd by others in a small French village because of her love of books and her lack of interest in the town's most eligible bachelor, Gaston (Luke Evans). She is very close to her father (Kevin Kline) so when he goes missing during a trip to the market, she sets out to find him. This leads her to a dark and forbidding castle inhabited by a Beast (Dan Stevens) and some enchanted objects, including a candelabra (Ewan McGregor), a clock (Ian McKellen), and a teapot (Emma Thompson). 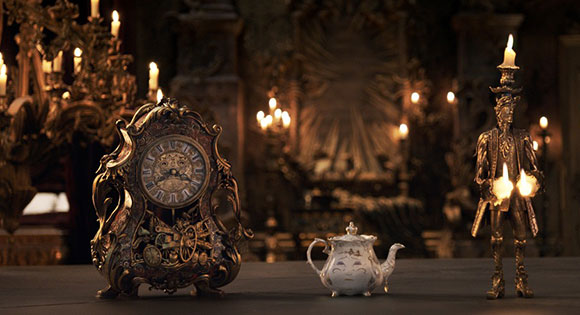 The Beast was formerly a prince but has been cursed by an enchantress (Hattie Morahan). His sin was to fail to see the beauty behind appearances. Until he can fall in love and have someone fall in love with him, he must live as a large, furry animal with horns. Will Belle be the one who breaks the spell?

Beauty and the Beast is more than just an entertaining romantic story. It offers children (and probably a lot of adults as well) the benefits of a good fairy tale. In The Uses of Enchantment: The Meaning and Importance of Fairy Tales, Bruno Bettelheim writes about the role of these kinds of stories in child development: "The child must learn step by step to understand himself better; with this he becomes more able to understand others, and eventually can relate to them in ways which are mutually satisfying and meaningful." A first step is to develop inner resources "so that one's emotions, imagination, and intellect mutually support and enrich one another." Here's where fairy tales can help. Bettelheim continues:

"For a story truly to hold the child's attention, it must entertain him and arouse his curiosity. But to enrich his life, it must stimulate his imagination; help him to develop his intellect and to clarify his emotions; be attuned to his anxieties and aspirations; give full recognition to his difficulties, while at the same time suggesting solutions to the problems which perturb him."

Here are a few ways we think Beauty and the Beast fulfills Bettelheim's description of a valuable story:

Belle. Early in the story Belle reveals to her father that she is concerned about what the Village is saying about her. He reassures her that loving to read -- using her intellect -- is nothing to be ashamed of. Further, he describes her as fearless, which she proves to be over the course of the story. Later, we realize that Belle is able to stand up to the villagers and admit her love for the Beast because she has developed self-esteem.

Gaston. Most children run into bullies, and others can easily recognize a narcissist. Gaston is both of these. He is so self-absorbed that he can't understand why Belle won't marry him, and when he is ignored, he reacts with anger and eventually violence. Children watching him learn about attitudes they should avoid and are given an opportunity to clarify their emotions about such people. 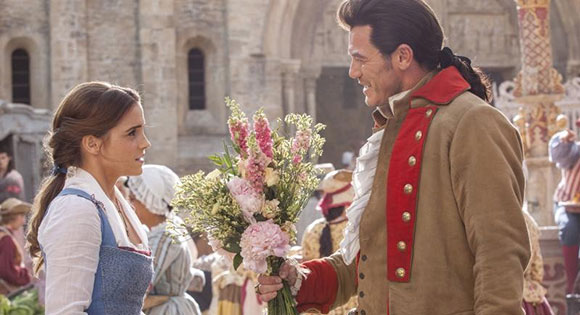 The Villagers. The people in Belle's hometown judge her and gossip about her and her father. They are easily manipulated by Gaston into admiring him and hating the Beast. Children watching these dynamics are encouraged to recognize that such behaviors do happen, and they can't ignore or run away from them. Instead, they must develop their inner resources to deal with them.

The Enchanted Objects. Through no actions on their own parts, the people who used to surround the prince/beast have been turned into objects. They want to help him break the curse and also have aspirations of their own about what they will do if they can become human again. Listening to their chatter, children's imaginations are stimulated. They are also encouraged to dream and devise plans of action. 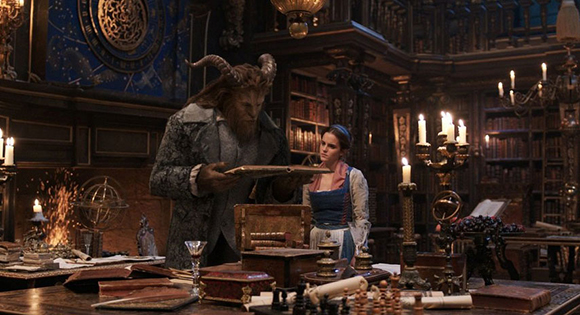 The Beast. Change is the name of the game for The Beast. First, he is changed into a beast for an act of thoughtlessness. Then, as he gets to know Belle, he makes little changes in his behavior: inviting her to dinner, showing her his library, sharing walks and books with her, laughing with her. When he knows he is in love with her, he makes a big change – letting her go back to help her father. When Mrs. Potts sings to Belle and the Beast as they dance in the ballroom, she catches what's happening: "Barely even friends / Then somebody bends / Unexpectedly / Just a little change / Small to say the least."

Perhaps this is the biggest lesson of this fairy tale. Change is possible. It doesn't have to be a big change. Step by step we learn and grow, and the result is love.