Directed by Niki Caro
A portrait in courage told through the true story of a Polish couple who saved hundreds of Jews during World War II.

At Yad Vashem, the World Holocaust Remembrance Center in Israel, there is a walk of trees and an extensive database devoted to honoring the "Righteous Among the Nations." Here is how they are described:

"Attitudes towards the Jews during the Holocaust mostly ranged from indifference to hostility. The mainstream watched as their former neighbors were rounded up and killed; some collaborated with the perpetrators; many benefited from the expropriation of the Jews' property.

"In a world of total moral collapse there was a small minority who mustered extraordinary courage to uphold human values. These were the Righteous Among the Nations. They stand in stark contrast to the mainstream of indifference and hostility that prevailed during the Holocaust. Contrary to the general trend, these rescuers regarded the Jews as fellow human beings who came within the bounds of their universe of obligation."

Antonina Zabinski and her husband Dr. Jan Zabinski are included in this special group. They are credited with saving some 300 Polish Jews by providing an escape route from the Warsaw Ghetto through the haven of their zoo to other safe places. This film, based upon the bestselling biography of Antonina by Diane Ackerman, tells their story. It is directed by Niki Caro (Whale Rider, North Country), who is especially adept at creating portraits of strong and courageous women. 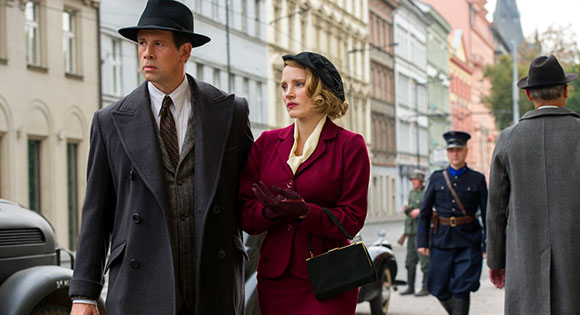 The film opens in the summer of 1939. Dr. Jan Zabinski (Johan Heldenbergh) is the zookeeper of the Warsaw Zoo, and he and his wife Antonina (Jessica Chastain) and their son Rhys (Timothy Radford and later Val Maloku) live on the grounds. After opening the gates to the public, she bikes through the zoo, warmly greeting all the animals, while being followed by a camel! During a dinner party that night for the director of the Berlin zoo, Lutz Heck (Daniel Bruhl), she is called out to help with a newborn elephant. It's clear that she has a special connection with the animals. 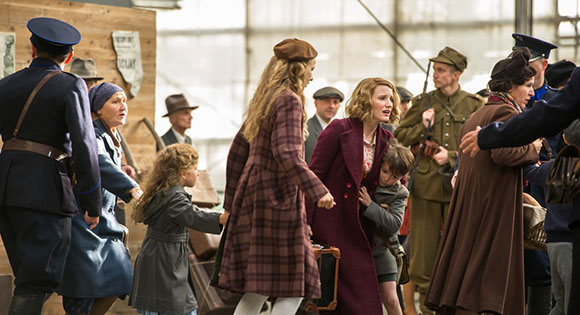 This makes it all the more horrible when Poland is invaded by Germany and the zoo is bombed. Some of the animals die in their habitats; others escape and are killed by the army. When Heck, now Germany's top zoologist and an army officer, suggests that he can take their prize animals to safety in his zoo, the Zabinskis reluctantly agree. But then he returns with other German officers for a shooting party on the zoo grounds during which they kill almost all the remaining animals. 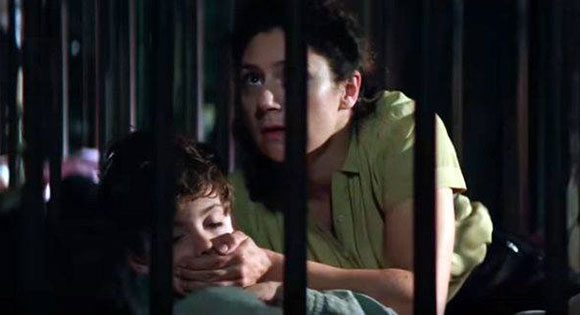 We are not surprised, then, when Jan begins working for the Polish resistance and Antonina suggests that they use the empty facilities at the zoo to shelter Jews. After they get permission from Heck to start a pig farm, Jan begins smuggling out Jews under garbage collected from the Warsaw Ghetto to feed the pigs. Later, a sympathizer with the German Labor Committee arranges for Jan to escort people out with a special pass. They stay in the zoo until they can be moved elsewhere. Some also stay in the villa, hiding quietly during the day and coming out to socialize at night. Among these "guests" are sculptor Magda Gross (Efrat Dor), lawyer Maurycy Fraenkel (Iddo Goldberg), and Urszula (Shira Hass), a young woman who was raped and beaten by the German soldiers before Jan took her out of the Ghetto in his truck.

It is during a conversation with Urszula that we get some insights into Antonina's state of mind through this period. She shares that her father was shot in Russia and she and her family had to run and live in hiding. This life is hard, she tells the young Jew she is sheltering, "because you don't know who your enemies are or who to trust." Antonina and Jan prove they can be trusted and they are willing to take the risk of immediate death if their rescue efforts are discovered. 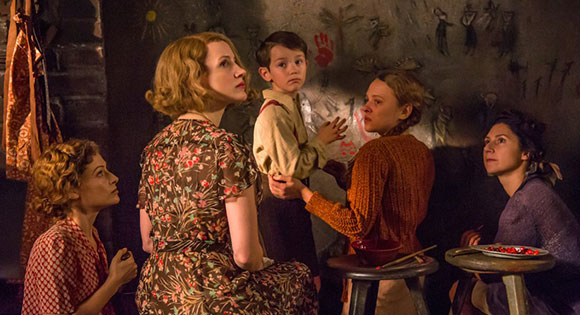 The Zookeeper's Wife is a portrait of courage. Jessica Chastain's performance as Antonina is nuanced and effective. She transforms from the shy and unassuming animal whisperer in the opening scenes to a strong and fearless defender of the persecuted, and we can understand how she changes step by step. We also see the toll such efforts take upon compassionate people, and we admire her even more.