Directed by Simon Curtis
Sobering biodrama about a successful writer who learns that you can't always get what you want.

A. A. Milne (1882-1956) was one of the most successful English writers of all time, known for his poems and stories about a boy and his teddy bear. His whimsical and endearing creations — Winnie-the-Pooh, Christopher Robin, Eeyore, Tigger, Piglet, Kanga, Roo, Rabbit, and Owl— captivated the hearts and imaginations of young and old alike. 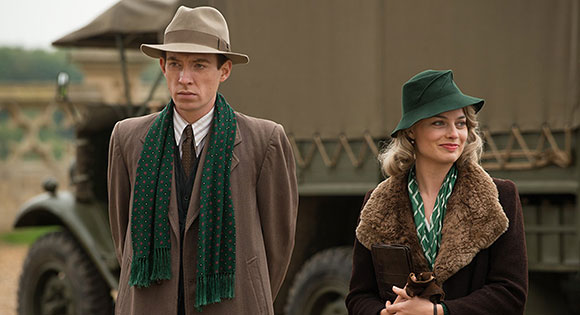 He did not start out to write such fare. In this sober-minded and visually impressive biodrama, we first meet Milne (Domhnall Glesson) and his glamorous wife Daphne (Margot Robbie) when they are living in London. He's a popular West End playwright known for his light material and humor. But just back from witnessing the slaughter in the trenches of World War I, he declares, "I've had enough of making people laugh, I want to make them see."

Milne is filled with righteous indignation over the government propaganda about bravery, honor, and sacrifice for King and Country. Added to his hated of war is a bad case of post-traumatic stress disorder where even something like the pop of a champagne bottle or a burst balloon sends him in his mind back into the trenches. 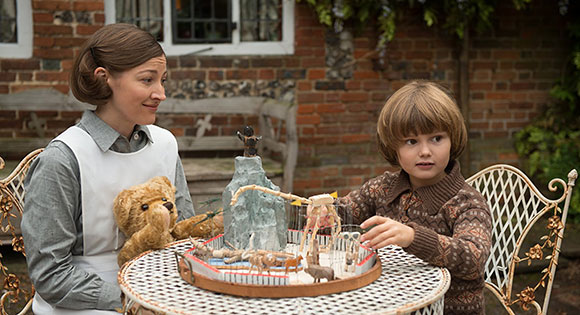 Daphne proves unable to give him the loving care and concern he needs; she's more interested in fame and fortune. They have a son, but she refuses to nurture him, having wanted to have a girl who could never be sent to war. They hire a nanny, Olive (Kelly Macdonald), who serves as the boy's mother and father when his parents travel and attend numerous social events.

Intending to write a meaning-rich book about the need for peace, Milne moves his family to the countryside where he savors the silence and solitude and tries to write. When Daphne returns to London and Olive takes time off to care for her mother, Milne and Christopher Robin (Will Tilston), nicknamed Billy Moon, now eight, finally bond. They go for long walks in the woods, making up games and tapping into the lonely boy's imaginative world of stuffed toys. 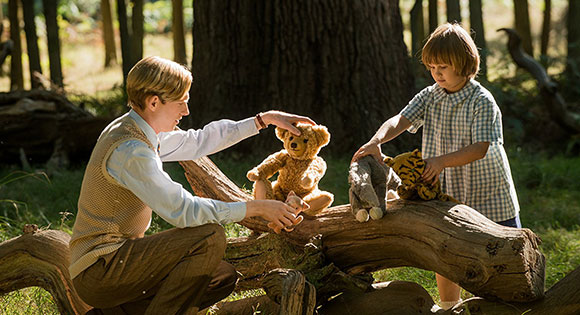 With an illustrator friend, Ernest (Stephen Campbell Moore), Milne creates a book of stories about a boy, Christopher Robin, and his bear, Winnie-the-Pooh, and their adventures in the 100 Acre Wood. It becomes a smash hit. This delights Daphne, who throws herself into promoting the book and her son to a voracious pubic.

But all the publicity creates a rift between father and son. The media are much more interested in pictures of and stories about the real Christopher Robin than they are in the writer. The boy resents that his childhood play with his father has been sold as a book; he hates being a celebrity. Later, after being bullied in school, eighteen-year-old Billy Moon (Alex Lawther) confronts his father about how Winnie the Pooh destroyed his life. He does the one thing his parents dread most: he enlists to fight in World War II. 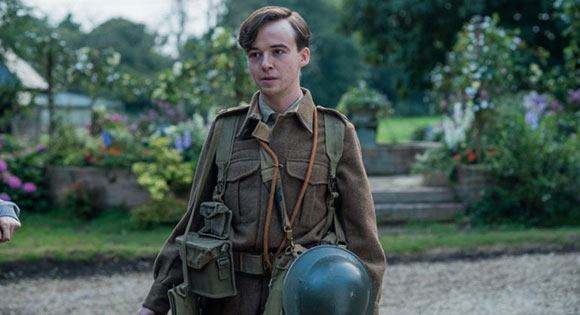 Director Simon Curtis previously explored the impact of a celebrity obsessed culture on a sometimes reluctant star in My Week With Marilyn. Goodbye Christopher Robin continues that focus through little Billy Moon and adds in an examination of the trials and tribulations of a talented writer who is not content with the immense success he achieves.

Life often throws a surprise at us, and in Milne's case, he never gets what he really wants — success for writing for adults. Sadly, as portrayed in this film, Milne doesn't realize that he does indeed change how people see the bustling and brawny world. He creates an alternate universe of wonder and play and happiness derived from simple activities and relationships. It's too bad he nearly destroyed his son in the process.

The Tao of Pooh

The te of Piglet