Love & Bananas: An Elephant Story is opening in theaters throughout the spring and summer. To find a screening near you, visit the official site. Information is also available on how you can host a screening.

Elephants have been revered in Southeast Asia for centuries. They also have served as beasts of burden for the logging and construction industries. Others work for trekking companies, providing rides for tourists. Habitat loss means that few Asian elephants live in the wild. There are only 45,000 of these intelligent, social, and sensitive beings alive today. And most of them live in harsh conditions and suffer a lifetime of abuse. 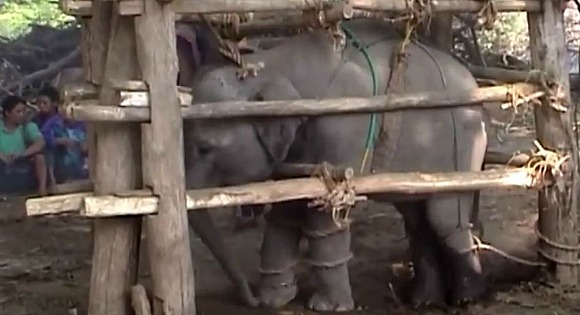 Baby elephants are taken from their herd and subjected to a cruel process called the "crush box" designed to replace their memories of their mother's' love with fear of humans. Restrained so they cannot move, they are beaten and deprived of food and water. And just in case these elephants forget that they have been transformed from wild creatures into tame slaves, bullhooks are used regularly to control their behavior. In Cambodia and Thailand, they provide rides and perform in shows for tourists, who often remain oblivious to their poor living conditions; they are usually chained in small quarters and given no opportunity to interact with other elephants. (See 10 Reasons Why You Should Take Elephant Rides Off Your Bucket List.)

Love & Bananas: An Elephant Story is an extraordinary documentary about a handful of people who have set out to rescue as many abused and exhausted Asian elephants as they can. First-time director Ashley Bell does a great job introducing us to Lek Chailert who has spent 20 years on a loving and compassionate mission to provide a sanctuary for these noble creatures where they are free, happy, and allowed to live as elephants are supposed to live – wandering around, playing in water, and in the company of a herd. No wonder Lek was named one of Time Magazine's Heroes for Asia for her work in conservation in 2005 and the Ford Foundation's "Hero of the Planet" in 2001! 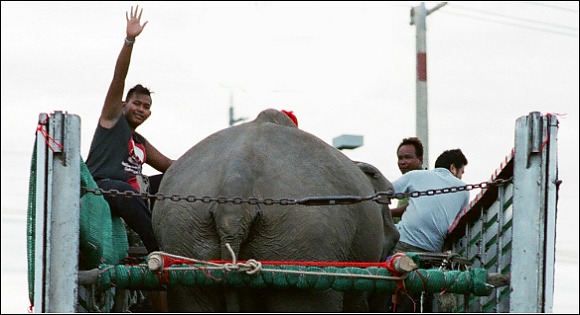 The dramatic and emotional core of this documentary is when Lek prepares a path towards liberation for Noi Na, a 70-year-old, partially blind trekking elephant whose owner is willing to release her to live at Lek's sanctuary. But this involves transporting the elephant by truck 480 miles across Thailand. Watching this footage is quite nerve wracking as Lek's team worries about Noi Na's nervousness and the dangers of dehydration and collapse. Everyone celebrates when they successfully reach the sanctuary and Noi Na is greeted by the other elephant residents. The joy continues as she walks free out into the open spaces and wades in a mud pond. 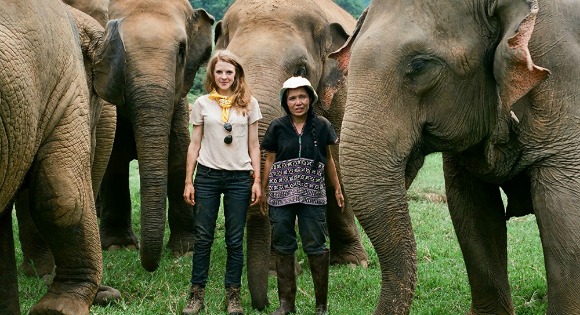 Love & Bananas : An Elephant Story touched our hearts, and it will move you as well. We need more freedom fighters like these Ashley Bell and Lek Chailert who are willing to do whatever it takes to advance the cause of elephant rights and well-being. If you'd like to help, visit the "Take Action" section of the film's website.