Directed by Marc Turtletaub
A lovely film about friendship and the challenges of middle age.

Twitter Facebook Link Print
Share
Each lifetime is the pieces of a jigsaw puzzle.
For some there are more pieces,
For others the puzzle is more difficult to assemble. Some seem to be born with a nearly completed puzzle.
And so it goes.
Souls going this way and that
Trying to assemble the myriad parts. But know this. No one has within themselves
All the pieces to their puzzle.

— Lawrence Kushner in Honey From the Rock

Agnes (Kelly Macdonald) is a disciplined and dutiful housewife with a hard-working husband Louie (David Denman) and two grown sons, Ziggy (Bubba Weiler) and Gabe (Austin Abrams) They live in the modest row house in New Jersey where her parents also lived. 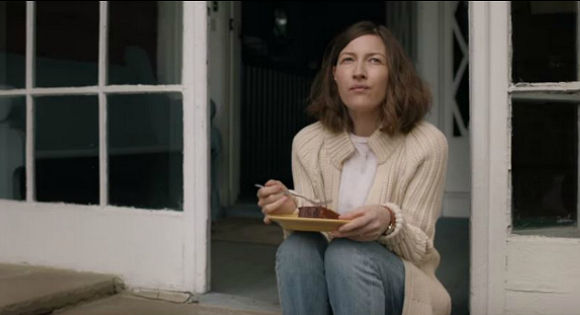 In a telling opening scene, we watch Agnes cleaning up her house, baking a cake, and serving all the guests drinks and snacks, before bringing out a candle-covered cake. Only then do we realize that all this preparation has been for her own birthday party. As her son tells her later, he is astonished at how many things she can do with such ease, accomplishment, and clarity.

Agnes loves jigsaw puzzles. They are her passion and she is thrilled to receive a 1,000 piece puzzle for her birthday. With focus and delight, she completes it in two hours. Wanting similar challenges, she takes the train to lower Manhattan to a store specializing in puzzles. At the cash register, she spots a notice from a puzzle champion who is "desperately seeking" a partner. 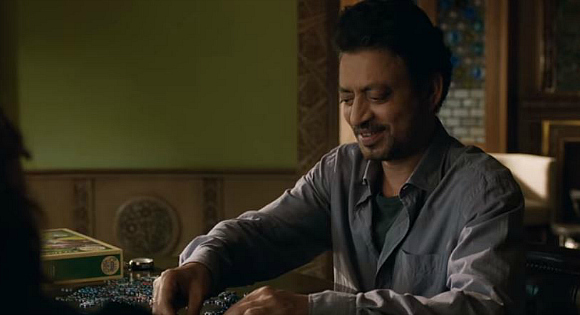 Marshalling an unusual burst of energy for an activity outside her housework, Agnes answers the ad and meets Robert (Irrfan Khan) who lives in a spacious New York apartment. He's a wealthy man having made a lot of money off a patent for one of his designs. Now his wife and puzzle partner has left him and he wants to enter a national contest; the winner then would go to the world championship. Agnes slowly charms him with her soft-spoken nature and her enthusiasm for puzzles. After he watches her work, he tells her she's the best puzzlier he has ever met.


— Lawrence Kushner in Honey From the Rock

Puzzle's staying power as an intimate drama about a middle-aged woman coming into her own is grounded in the 2009 Argentine film Rompecabezas by writer and director Natalia Smirnoff. Marc Turtletaub is the director, and the nuanced screenplay is by Oren Moverman. Everything about this film has been done with impeccable taste and insight. It is one of the most spiritually literate films of 2018. Here are some things that came to us as we let this film simmer in our consciousness.

Relationships are the spiritual web of our lives. The quality of our lives are measured by these essential bonds. They are the central source of meaning, miracle, and transformation in our days. We found ourselves intrigued by Agnes's relationships with her husband, sons, and aunt who all have play a role in her unpredictable journey of transformation. One of the most interesting themes in this film is the responses of these characters to her attempts to break out of her humdrum existence and become her own person. 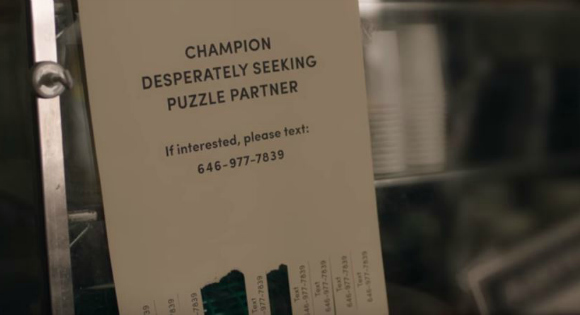 When Agnes reads Robert's ad and then leaves her habitual routines behind to train for the puzzle contest with him, we were reminded how our lives can be changed in the blink of an eye by strangers who then offer what they can as our relationships deepens. Or as the writer Willa Cather once observed, "One cannot forecast or divine new conditions that will make for happiness; one only stumbles upon them by chance, in a lucky hour, at the world's end, somewhere and holds fast to the days."

It is often very hard to believe that it is possible to turn our lives around and do a new thing. On a scale of one to five, we usually score only a three, which means we get stuck or mired down in obstacles that block the change we are seeking. That is why we found it very easy to empathize with Agnes's struggles to truly open to new ways of being.

Puzzles for adults came out in 1900 and eight years later they spurred a craze in the United States. All around the country, men and women ignored meals to continue their quest to complete a puzzle. We can imagine their screams of delight as the last pieces fit into place. When Agnes presses Robert to explain why puzzles have such a hold over certain people, he responds in this philosophical way:

"It's a way to control the chaos. Life is messy and random. It doesn't make any sense. Life's just random. There's nothing we can do to control anything. When you complete a puzzle, you know you have made all the right choices. At the very end, everything makes a perfect picture. What other pursuits can give you that kind of perfection?"

As we listened to this explanation, we wondered what roles puzzles play in the lives of people in these tense times. Do they offer an escape or do they present an opportunity to succeed in a modest way?

Husbands and wives must become adept at capitalizing on crises and constantly renewing the sources of love. They are challenged to make the most of the different seasons of a marriage and devote themselves to the soulful unfolding of their partner. Agnes and Louie have much to teach us about the silent battles, the fears, and the disappointments of this all-important intimate relationship.

One of our favorite scenes in the film is when Agnes steps on a piece of glass on the floor and cuts her foot. Her husband holds her foot gently and then tenderly removes the glass. It is a revealing moment of compassion and empathy, one of those little acts which keep chaos at bay and love in the foreground.

We are very fond of movies about the spiritual practice of transformation. As we reveal in our trade secrets, these are movies in which something happens and the character finds his or her life turned around. The catalyst may be immensely dramatic or so subtle that you barely notice it. In any case, film is an ideal medium to convey the process of change with its emphasis upon time, motion, and energy. Transformation films proclaim that no matter who you are and what has happened to you, it is still possible to be and to do something new. Puzzle, which so movingly portrays how Agnes breaks through her shell so she can taste and experience life more fully, is a powerful transformation film.

After viewing Puzzle we spent some time pondering the creative ways in which this extraordinary film charts the truths of what Lawrence Kushner wrote in Honey from the Rock.