Directed by Bo Burnham
A fascinating and nuanced portrait of a 13-year-old compulsive cell phone user yearning for connections.

Kayla (Elsie Fisher) is a conflicted 13 year old who is lonely, shy, and socially awkward. She has no close friends at middle school where she moves through the crowded hallways as a nearly invisible person. Kyla secretly yearns to relate in some simple and satisfying way to Kennedy (Catherine Oliviere) and Aiden (Luke Prael) who have been chosen as having the "Best Eyes" by their peers. 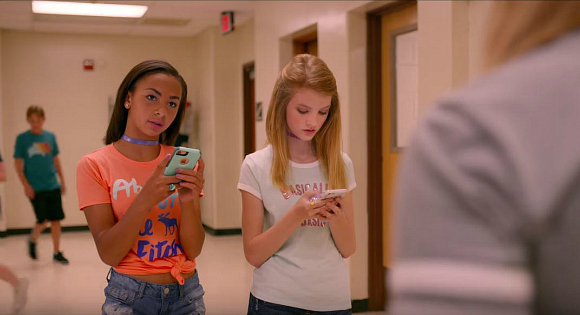 At home her single parent father (Josh Hamilton) tries to have meaningful conversations during dinner while Kayla is busy checking out things on her cell phone. She is alternatively irritated or embarrassed by his attempts to lift her spirits or share with her some of the small shards of wisdom he has gathered over the years.

Kayla has found one way to try to connect with teens — her own YouTube channel where she posts advice videos. "Being yourself is really hard," she says in one of them. "It is not changing yourself to impress other people." At school, she's been classified as "most quiet" by classmates but Kayla sees herself as funny, cool, and talkative. The challenge is to follow your inner compass: "Basically, you know, like be yourself, and don't care about what other people think about you." 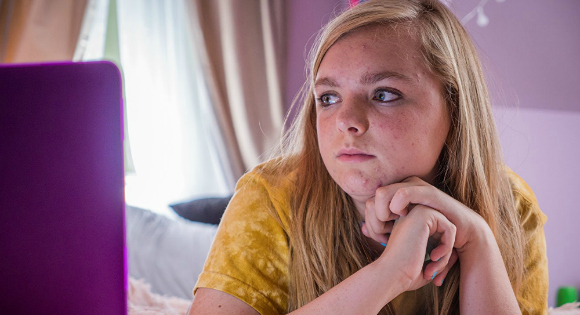 Like so many of her fellow teenagers, Kayla is constantly trying to improve herself. Notice the sticky notes on her mirror and elsewhere with self-help messages such as "Go get em!" and "Dream Big!" To look more appealing, she covers up her embarrassing acne and runs through a daily makeup routine with a YouTube tutorial. She advises others, and herself as well, to put themselves out there. Kayla wants to be the best person she can be, but the only other individual in the world who shares this quest is her father.

Writer and director Bo Burnham has created a breakthrough portrait of a teenage girl whose life is consumed by the world of the Internet and social media. There is an ever-growing number of films dealing with the tech-obsessed and hormone-fueled world of adolescents: Eighth Grade is the best of the lot with Elsie Fisher's brave, authentic, and enticing performance as Kayla. 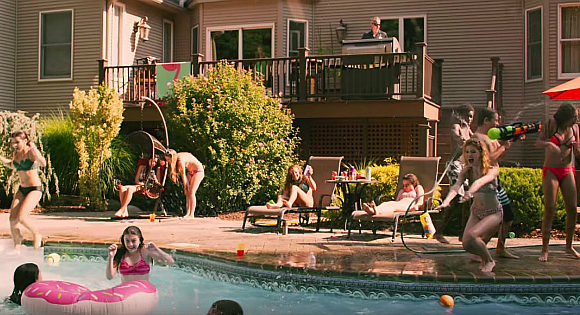 Burnham also catches the surreal happenings, rituals, and events of middle school during a class about sexuality, an enactment of what to do during a terrorist attack, and a swimming party with the popular kids. As the school year draws to a close, Kayla gets to spend a day shadowing a high school senior at the school she will be attending in the next year. Olivia is friendly and accepting, and hanging out with her and her friends at the mall, Kayla feels she finally fits in. She is troubled, however, by the sexual advances of Riley (Daniel Zolghadri), a member of Olivia's circle. She breaks down at home and is comforted by her father. He gives a speech that is as supportive of his daughter as the father's talk with his son in Call Me by Your Name. 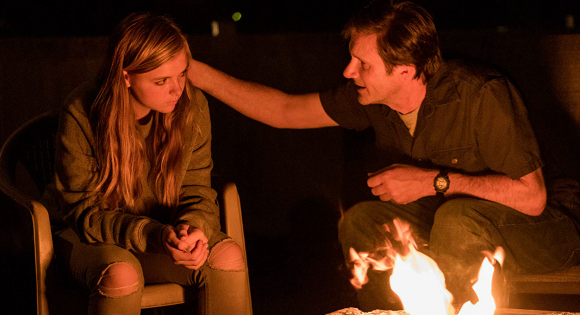 Sherry Turkle studies the effects of digital technology on relationships, family life, and work interactions. In Reclaiming Conversation: The Power of Talk in a Digital Age, she notes that many youth are unable to go for more than a couple minutes without checking their phones and that they prefer texting over talking. She notes that researchers have discovered a 40 percent decline in empathy among college students. That is a character quality that develops and flourishes in face-to-face conversations.

Watching Kayla navigate her digital world, we found ourselves feeling sad for her — but not because of her digital addiction. We just remembered our own experiences decades ago in middle school, which seems to us to always be a really horrible time! Yet here is Kayla, finding her own way, using the technology available to her, figuring out when enough is enough, determined to establish face-to-face relationships in the real world. We totally understood why her father could say, "The more I watched you, the less scared I got about you being okay." We aren't worried about her either.