Directed by Nadine Labaki
A thoroughly absorbing tale of poverty, determination, and faith as equal parts resistance and resurrection.

Words cannot do justice to the deeply primal power Nadine Labaki’s third feature and the winner of this year’s Grand Jury Prize at the Cannes Film Festival, Capernaum (Capharnaüm), a title that translates as "Chaos." It an experience that must felt, a journey that must be taken, and a cry from Hell that must be heard, internalized, and heeded. Like the most lasting sacred scripture, its themes are simultaneously simple and complex, inspiring and infuriating, and like sacred scripture, its central story feels both extremely specific and expansively universal.

At the harrowing heart of this turbulent film are the trials and tribulations of an impoverished Lebanese boy, pint-sized Zain (remarkably embodied by Syrian refugee Zain al Rafeea), who might be 12 years old, though no one seems to know for sure, and no one, including Zain, seems to really care. Labaki frames Zain’s tale in alternating present-day courtroom scenes and flashback snapshots, and this back-and-forth style adds mightily to the filmmaker’s desire to showcase both the on-the-ground reality of Zain’s poverty-stricken Beirut existence, as well as the red-tape-strewn systems that keep such realities so pervasive. 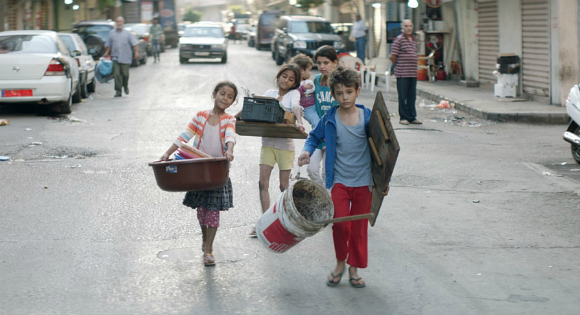 In the courtroom, the formal questions of a sterilely sympathetic judge (Elias Khoury) and Zain’s steely, short answers reveal that Zain has brought suit against his parents (Kawthar al Haddad and Fadi Kamel Youssef). Their crime? Bringing him into the world. If this complaint at first sounds ridiculous and naive, the flashback scenes begin to pile up to bring Zain’s point home. Through Labaki’s lens, the horrific and harrowing events that have led up to Zain’s sharply shouted accusations burrow deep beneath the viewer’s skin until his once seemingly childish suit makes complete and heartbreaking sense.

In flashbacks, Zain’s daily routine shows him to be hardworking and wise beyond his years. He earns cash by performing errands for shopkeepers, reluctantly participates in his parents’ money-making schemes, and cares for his young siblings, especially his pre-teen sister Sahar (Cedra Izam). This routine is interrupted when Sahar is married off to a much older shopkeeper. Enraged, Zain takes the bus to another town where he angrily wanders the filthy streets until he encounters Ethiopian refugee Rahil (Yordanos Shiferaw) in a dilapidated amusement park. Quietly stoic and effortlessly motherly, Rahil makes room for Zain in the rundown dwelling she’s created for herself and her baby Yonas (Boluwatife Treasure Bankole). Within these thin walls, Zain can’t escape the poverty that has always plagued him, but he does find something he has never known before: a love-filled home. 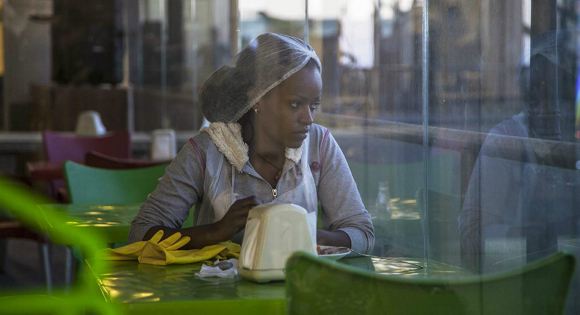 As Zain, Rahil, and Yonas build a chosen family together, glimpses of what they might achieve if not for their impoverished instability begins to shine through. But familial fantasy is continually overshadowed by reality. Rahil earns money thanks only to a forged permit and Zain and Yonas, though beautiful in their bubbly brotherly camaraderie, are reliant on her extremely precarious work situation. All three remain a short step away from being broken apart, and when that break inevitably happens, it is heart-stoppingly horrible. 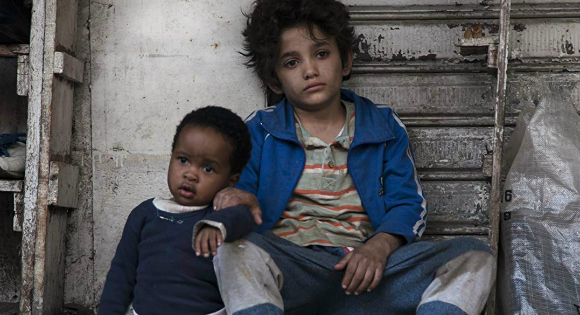 But Labiki has more on her mind than simply showing the horrors of poverty. As the flashback and courtroom scenes converge, a strange sort of hope appears on the dusty horizon. Labiki is not so sentimental as to suggest that simplistic justice is possible in situations this dire, but as Zain comes into his own power and demands a new life for himself, and as Rahil and Yonas seek their own way forward, Capernaum becomes an unlikely testament to faith as equal parts resistance and resurrection. By the film’s end, this very particular Lebanese story reaches the height of the greatest myths, giving us heroes who suffer, sacrifice, and just might succeed, and whose examples of fiery determination hold the power to spark cries for justice the world over.