The overpopulated zombie genre seems to be shuffling toward the verge of playing itself out, if it hasn’t already altogether died, but Ever After (Endzeit) is packed with the quiet power needed to inject new life into this increasingly bloodless brand. And if even hearing the word “zombie” typically makes you run screaming in the other direction, you would still do well to pay attention to the uniquely undead and affecting parable that director Carolina Hellsgård and writer Olivia Vieweg have created.

This self-described “feminist gothic fairie tale zombie movie” begins in near-future Germany, where only two cities have succeeded in mostly shielding themselves from a rampant virus that has birthed a spreading zombie apocalypse. In Jema, a more humane approach rules and scientists are searching for a cure for those affected. In Weimar, panic overrules humanity and those who are bitten by the affected are immediately executed. 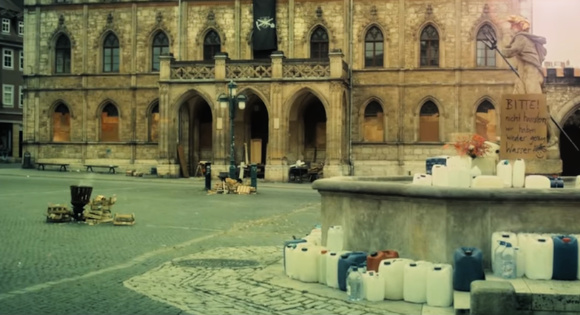 Vivi (Gro Swantje Kohlhof) has spent two years in a Weimar mental institution, haunted by memories of her lost family, but when she volunteers to work the city’s border wall, she opens herself up to horrors that have, for years, only stalked her mind. On her first day, she witnesses two attacks on one of her fellow patrollers, the first is by a zombie horde, and the next comes in the form of a bullet to the head, shot by no-nonsense patrolloer Eva (Maja Lehrer). The brutality of both actions pushes Vivi into a frenzied search for a way to Jema, where she hopes she might find a more level-headed and evolved way to deal with the hopeless crisis. 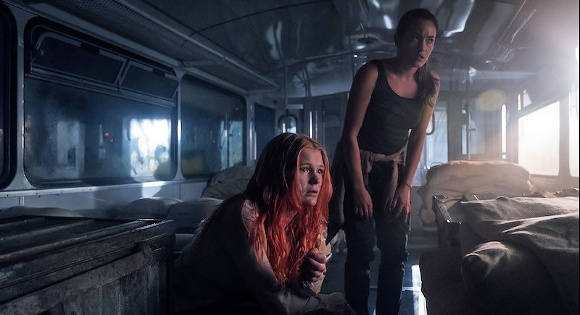 Vivi hops a supply train on its way to Jema and soon finds that Eva has also stowed herself away. When the train breaks down, these two very different protagonists must join forces to a path to Jema without losing their humanity to the ubiquitous threat of zombie bites. These establishing scenes of the film are effectively tense, even as they will feel very familiar to anyone who has ever seen or even read a synopsis of a zombie film. It’s only in the scenes that follow that Ever After (Endzeit) evolves into something wholly its own.

As Vivi and Eva struggle to survive this world and one another, memories of life just before the apocalypse come flooding back to them both. Guilt engulfs their minds and informs their decisions. Each of them questions their own actions leading up to the current horrors and their existential inner yearnings for repentance and redemption become far more compelling than the physical threats of violence stalking them. Hellsgård and Vieweg keep these memories elliptical and mysterious, opting to suggest rather than explain, but the lack of obvious coherence adds to the poetic richness of each woman’s crises. 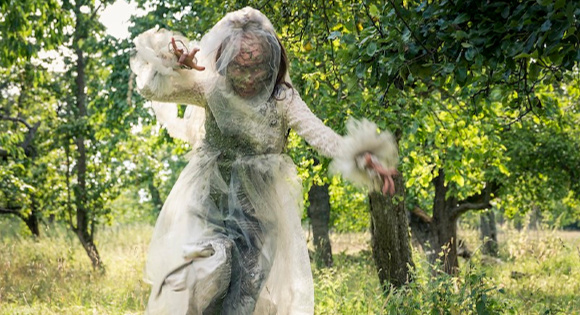 When new discoveries about the apocalypse is revealed and Vivi encounters a woman covered in buds simply credited as “The Gardener” (Trine Dyrholm), the film nimbly takes on an added layer of ecological meaning. The Gardener, a sort of earth mother scientist, is developing new organic life in a greenhouse hidden in the woods somewhere between Weimar and Jema, and is convinced that something healthily generative is happening in the wake of all of this terror. The Gardener’s obtuse philosophical ponderings are as confounding as some of the other women’s memories, but it suggests a climate justice message that twists typical zombie fare into a new form, one that asks what bold new things might be happening to the earth itself while humans remain desperately obsessed with their own need to survive.

Even those who fear that the horror genre is too gory or frightening for their tastes will find potency in the film’s final third. Instead of relying on classic blood and guts, Ever After (Endzeit) relies on a creeping spirituality that blooms within the shadows of its horror. Like all good fables, it leaves its audience with more enacting questions than blunt answers, begging us to look inward to find the tools we’ve forgotten we have, and to look to the earth for suggestions on how to start anew, reminding us that human and natural connection might be our only antidote to the onslaught of the end times.