The Trip to Greece

Directed by Michael Winterbottom
Your chance to go on the road again with two middle-aged comedians who can put a funny spin on most everything.

The Trip to Greece is available for streaming on digital VOD channels.

English actor Steve Coogan and comedian Rob Brydon are traveling together again -- having fun, sitting in the sun, doing vocal imitations of some of their favorite actors, flirting with women, eating delicious meals, and throwing verbal zingers at one another. This creative comedy routine worked in their three prior films: The Trip, The Trip to Italy, and The Trip to Spain. If the concept ain't broke yet, use it again and again.

In Greece, they have six days to retrace the journey of Odysseus from Troy stopping at such landmarks as the Temple of Apollo at Delphia, the Ancient Agora of Athens, the Ancient Theatre of Epidaurus, the unique island of Hydra, the Daves of Diros, Nestor's Palace, Niokastro Fortress in Pylos, and Ancient Stagira. Along the way they argue about historical details and speculate about the people who proceeded them and their views on astronomy, democracy, and much more. 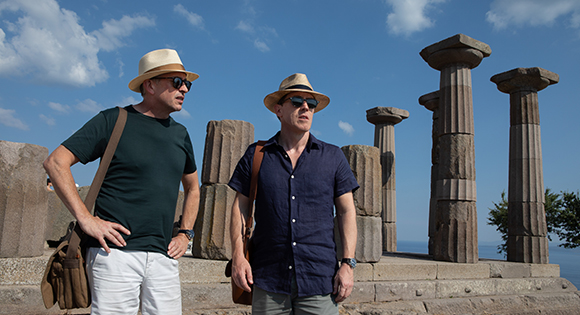 But, truth be told, we were more interested in the interactions between these two middle-aged men. As he is wont to do, Coogan tries to get a rise out of Brydon by bringing up his performance as comedian Stan Laurel in the recent film Stan and Ollie. His traveling companion quips: "I watched it on a BAFTA screener and only paused it three times to go to the kitchen." That's not the praise Coogan was looking for but it is expected, given these two's ongoing competition. 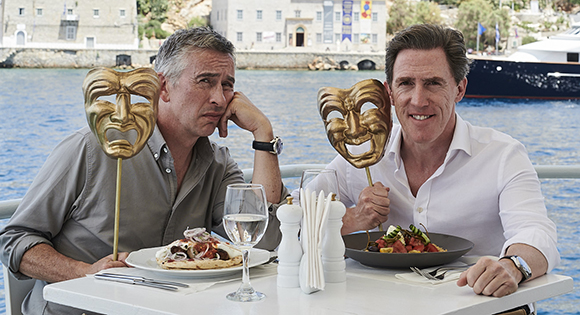 As on their other trips, they impress each other with impersonations. We chuckled through their versions of Dustin Hoffman, Sean Connery, Mick Jagger, and Werner Herzog. Michael Winterbottom, who also helmed films about their previous trips, makes the most of the Greek vistas but seems unsure how to end this breezy jaunt. Word has it that The Trip to Greece will end the series. We’ll miss these entertaining travelers.