What the Constitution Means to Me

Directed by Marielle Heller
Live Broadway cast production of a play about how the personal becomes political.

Heidi Schreck stands in an American Legion hall in 1987 surrounded by photographs of 163 men who have honored the 230-year-old U. S. Constitution during their lives. This exuberant and charismatic woman, now a middle-ager, explains that she's going back into her past when she was 15 years old and earned money to pay her college tuition by participating in contests where she gave speeches about the Constitution. Heidi, even at this early stage of her life, is a very smart, funny, and a creative storyteller and debater. 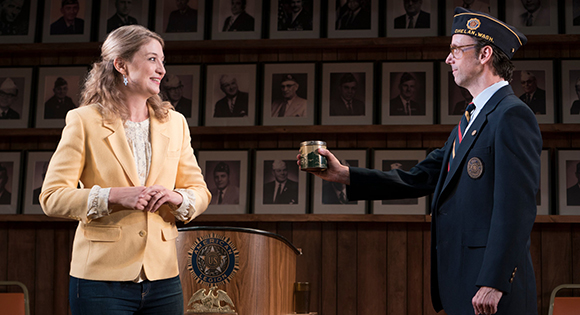 But Schreck, who is also the screenplay writer, and director Marielle Heller quickly shift the tone of the show from light-hearted nostalgia to speeches of heavy intensity. Here we are given enlightening and prophetic lessons in how the personal becomes political. One is Heidi's heart-afffecting account of her great-great grandmother, a mail-order bride from Germany, who died at the early age of 36 of melancholia in a mental institution. The second is a lament for her maternal grandmother whose violent second husband put the lives of her children in jeopardy.

All of this personal history, stories from her ancestors, comments on Supreme Court decisions, and excerpts from audio tapes culminate is Heidi's descriptions of her harrowing experiences of rape and abortion. Women are not safe in America (see the statistics in the end piece), and the nation of the future will need more men like the one on stage with her playing an American Legion moderator (Mike Iveson). 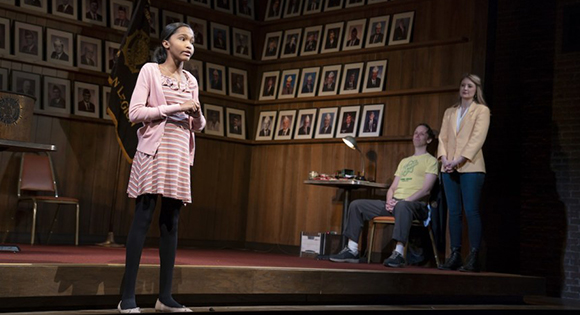 The final section of What the Constitution Means to Me has Heidi squaring off in a debate with Rosdely Ciprian, a 14-year-old Dominican-American parliamentary debater. This dramatic device enables the two women from different generations to envision the future in a country with the same Constitution or one in which it has been abolished and completely rewritten.

If you, like us, thought that this live Broadcast cast production of Schreck's play, was going to be a dry civics lesson on the provisions in the Constitution and the Bill of Rights, you are bound to be surprised by this vibrant, often extremely funny, and very informative production. Schreck conveys wisdom, empathy, and especially passion as she talks about what the Constitution really means for all of us.

On the 18th century creators of the Constitution:
"A group of magicians got together and preformed a collective act of ethical visualization."

On the Founding Fathers:
"How literally should we adhere to a document that was signed by just 39 people -- all men, all white, all property owners and many of slave owners at that -- some 250 years later?

On how women have no rights:
"Our bodies have been left out of this document. . . . What does it mean if this constitution will not protect us from the violence of men?"

On the 14th Amendment:
"A giant, super-charged force field protecting all of your human rights. . . . The Constitution doesn't tell you all the rights that you have because it doesn’t know."

On how the United States lags behind:
"There are 178 constitutions around the world that acknowledge health care as a human right. Ours is not one of them."

On violence in America:
"The United States is one of the 10 most violent countries in the world. . . . So far this century, more American women have been killed by their male partners than Americans have died in wars. What does it mean if this Constitution will not protect us from the violence of men?"

On the future:
"Our Constitution acknowledges that who we are now might not be who we will become."