Directed by Reid Carolin, Channing Tatum
Heart-warming story about how a difficult dog and a damaged war veteran transform each other.

We love dog movies, and any time we have a chance to see one, we do.
It is heart-warming to be immersed in tales where dogs pull human beings out of depression, loneliness, and sadness.

In Kindred Spirits: How the Remarkable Bond Between Humans and Animals Can Change the Way We Live, Allen M. Schoen, an integrative holistic veterinarian, writes:

"There is little that separates humans from other sentient beings — we all feel pain, we all feel joy, we all deeply crave to be alive and live freely, and we all share this planet together."

That truth is beautifully illustrated in the film Dog.

Jackson Briggs (Channing Tatum), an Army Ranger, suffers from brain injuries obtained in combat, but he still wants to go back overseas for another tour. His officer tells him that they will consider recommending him to a security firm if he proves his medical readiness by taking a military dog, Lulu, on a road trip. She's a very temperamental Belgian Malinois (played by three talented dogs) who has to be restrained in a muzzle most of the time. The handler Lulu served with in Iraq and Afghanistan has died, and the family has requested the dog's presence at the funeral. 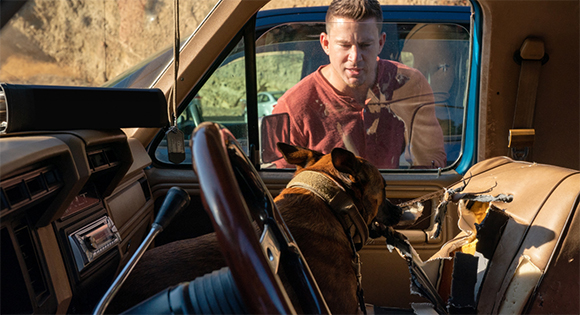 It's not an easy journey for either the ranger or the dog, as they travel 1500 miles down the Pacific coast in Briggs' old Ford Bronco. Both of them suffer from PTSD, which in Briggs' case means nightmares and disorienting headaches and in Lulu's means flights triggered by loud noises and fits of aggression, especially toward anyone who looks like those she was trained to attack. Storms can set them both off.

As co-directors, Reid Carolin and Channing Tatum make the most of the challenges facing this idiosyncratic soldier and the unruly dog. As the star, Tatum creates a character you can't help but like, laugh with, and admire for his eventual openness to Lulu's needs. During most of the movie, they are alone together. Their encounters with a pot farmer, a pet psychic, two sex therapists, a racist cop, and another Army Ranger who has trained Lulu's sibling are not nearly as interesting as their "conversations" as they gradually learn to trust each other. Transformation comes in all times and all guises, and here it comes through the human/animal bond. 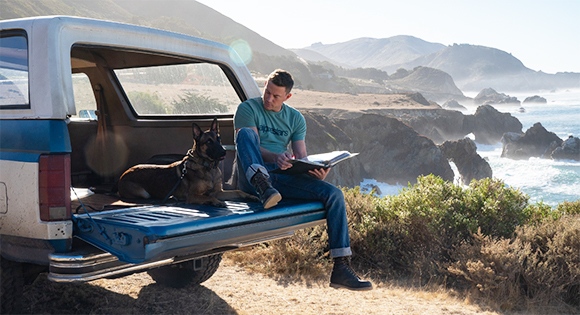 "Because of the dog's joyfulness, our own is increased. It is no small gift.
It is not the least reason why we should honor as well as love the dog of our own life, and the dog down the street, and all the dogs not yet born. What would the world be like without music or rivers or the green and tender grass? What would this world be like without dogs?
-Mary Oliver in Long Life

Anyone who has ever lived with a dog on a day-to-day basis knows intuitively that they have souls. There's a sparkle in their eyes, that bounce in their gait, and the eager anticipation they display as they move through the world. Dogs are warm-blooded and warm-hearted beings. They are also loyal, curious, and courageous. It's no wonder that dogs show up so often in movies. In our collection of Movies about Dogs, we list some of our favorites.