Directed by John G. Avildsen
The engaging story of a handyman at a housing complex who teaches martial arts to a boy yearning for mastery of self.

When Daniel (Ralph Macchio) and his mother move from Newark to Southern California, the teenage boy has culture shock. He feels out of place in this class-conscious environment. To make matters worse, the school bully (William Zabka), who holds a black belt in karate and leads a gang called the Cobras, starts harassing Daniel when his ex-girlfriend (Elisabeth Shue) takes an interest in him.

Since the local martial arts school (presided over by a tough Vietnam veteran) is the Cobras' turf and therefore off limits to Daniel, the boy is thrilled to learn that Miyagi (Noriyuki "Pat" Morita), the handyman at the housing complex, is a karate expert. The old man begins to tutor Daniel in self-awareness by giving him a bonsai tree. Then, with marvelous indirection, he puts the kid to work painting, sanding, and waxing.

John G. Avildsen, who directed Rocky, puts the emotional accent in The Karate Kid on the slowly unfolding and touching relationship between Daniel, who's fatherless, and Miyagi, who treats karate as an art that leads to both physical and mental fitness. Although the finale, in which Daniel faces his oppressor in a karate championship, is predictable, the true magic of this fairy tale lies in its positive portrait of one boy's transition into maturity through mastery of self. 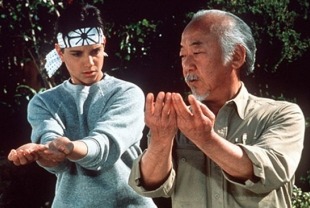 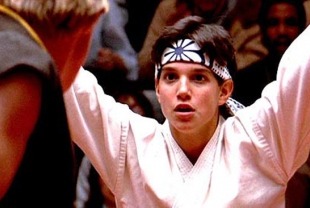