Directed by Thomas Bezucha
A heart-affecting gay romantic drama that unabashedly celebrates community as the ideal milieu for bringing out the best in people.

Henry (Arye Gross) is a Manhattan-based artist. On the eve of a major gallery exhibition of his paintings, he unselfishly flies back to his hometown in Montana to care for Sam (George Coe), his ailing grandfather who raised him. He's welcomed back to Big Eden by Grace (Louise Fletcher), a teacher who tells him that Dean (Tim DeKay) has also returned home. He was the love of Henry's life ten years ago before he jilted him and got married. Now Dean is divorced with two sons. The artist from New York also meets Pike Dexter (Eric Schweig), a very shy Indian who runs the general store, and Anna Rudolph (Corinne Bohrer), the mayor who plays a mean fiddle.

Writer and director Thomas Bezucha has fashioned a heart-affecting gay romantic drama that unabashedly celebrates community as the ideal milieu for bringing out the best in people. Whereas many filmmakers have satirized the homophobia and close-mindedness of small towns, Big Eden goes in the opposite direction emphasizing that community means accepting people just as they are — their gifts and beauty along with their flaws and inner pain.

Although Sam knows that his grandson is gay, Henry just can't muster the courage to talk about it with him, even after the old man says, "God has done a good job here." And while Henry and Dean try to work out the exact nature of their relationship, Pike falls in love with the artist. In an act of humble devotion and creative altruism, he secretly learns how to cook gourmet meals for Sam and Henry even though they are convinced the food is coming from Widow Thayer (Nan Martin).

In Thomas Bezucha's gentle and uplifting drama, the open hearted community of Big Eden becomes a midwife to new possibilities for several characters who finally open themselves to love. 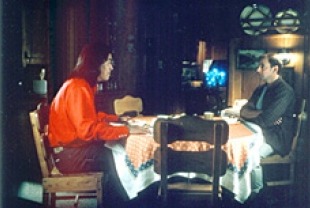