Directed by Steve Carr
A raucous sequel to the 1998 comic blockbuster in which the veterinarian who can talk to animals tries to help his friends save their forest habitat.

Once members of the animal kingdom learn that Dr. Dolittle (Eddie Murphy) can talk to them, they press upon him with their ailments and problems. Soon this ambassador of goodwill finds that he has little time for his wife (Kristen Wilson) and two daughters. That's okay with Charisse (Raven - Symoné), a 16-year-old who is dating and embarrassed by her dad's weird talent. Dr. Dolittle is just about to take his family on a trip to Europe when a raccoon (voiced by Michael Rapaport) contacts him about some very urgent business.

Dolittle is escorted into the forest where a beaver (Richard C. Sarafian) tells him that their habitat is under attack from land developers (Jeffrey Jones and Kevin Pollak) who plan to clear the area for condominiums. The only way to save the forest is to find an endangered species living there that by law has to be protected. Ava (Lisa Kudrow), a Pacific Western bear, lives there but she needs a mate. The resourceful doctor comes up with Archie (Steve Zahn), a civilization-loving, fast-food-guzzling, circus-performing bear. Only trouble is, this creature agrees with sentiments once voiced by comic writer Fran Lebowitz: "Nature and I have little in common. We don't go to the same restaurants, laugh at the same jokes, or most significant, see the same people."

Archie moves slowly, can't fish, doesn't like to get his paws dirty, and is extremely nervous about hibernating. Ava, in turn, seems to be hesitant to commit herself to this bumbling urban bear.

Steve Carr directs this raucous sequel to the 1998 comic blockbuster giving special attention to the antics of a whole menagerie of animals who eventually go on strike in support of the campaign to stop the land developers. Lucky (Norm Macdonald), Dr. Dolittle's plucky dog, narrates this silly tale with just the right tone. Of course, in the back of our minds we know it's not just wildlife habitat we should be worrying about. The way things are going for the planet's environment, our children's children will find themselves sharing the plight of the forest creatures. 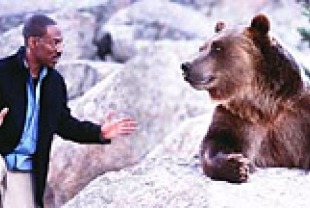