Directed by Eugene Corr
A young girl's struggle to hold onto her belief in herself, despite being the target of her emotionally unstable stepfather's anger.

Thirteen-year-old Rose (Annabeth Gish) lives outside Las Vegas with her two sisters, her cheerful mother Lily (JoBeth Williams), and her alcoholic and abusive stepfather Jack (Jon Voight). While the town gets ready for the first of a series of atom bomb tests in the Nevada desert, this family undergoes its own emotionally devastating explosions triggered by Jack, a psychologically traumatized World War II veteran whose anger and paranoia burn all too brightly.

Much of her stepfather's nastiness is aimed at Rose with consequent impact on her self-esteem. For instance, he blames her when his short wave radio goes on the blink. He never seems to notice how special she is, even when she does well in school. When Aunt Starr (Ellen Barkin) arrives to stay with them until her divorce is finalized, Rose savors the moments she shares with this clever, sexy, and understanding relative. Thanks to her counsel, Rose begins to see herself as a young woman; she even develops a crush on the boy who lives in the trailer park next door.

Eugene Corr has fashioned Desert Bloom into a coming-of-age drama that effectively captures the feel of the 1950s from the music of the era, to Mom's tuna fish casseroles, to Aunt Starr's cocktail dresses. Annabeth Gish is very natural and convincing as Rose, an adolescent who loves wildflowers — especially "the ones that grow in the hardest places." Jon Voight is quite terrifying as the unstable Jack, a man whose demons have gotten the best of him. JoBeth Williams as Lily, the let's-keep-everybody-together mother, delivers just the right mixture of buoyancy and regret in her role as family cheerleader. But the most satisfying performance here is by Ellen Barkin as Starr, a woman so obsessed with men that she consistently proves to be a loser in love.

On the day of the first above-ground nuclear test, Lily rouses the household by exclaiming: "Rise and shine, it's A-Bomb time!" Desert Bloom tries to explore too many themes, but it manages to make one point clear: certain children possess the resiliency to handle the stress and pain of a troubled home. Like a wildflower, Rose blooms in a hard place and transcends the negative fallout from her stepfather. 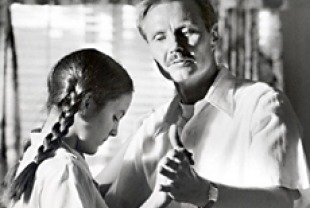