Directed by George Butler
An engaging documentary about the bone-chilling struggle for survival of an English explorer and his crew of 27 men in the disastrous 1914 Antarctic expedition.

After two ill-fated expeditions, Sir Ernest Shackleton set his sights once again on being the first to cross the Antarctic on foot and win the acclaim of all of England. In August of 1914, at the start of World War I, Shackleton and his crew of adventurers set sail from Plymouth, England, on the Endurance, a wooden sailing ship specially designed to withstand ice. He was 40 years old and this was his last shot at glory.

In January of 1915, the vessel was trapped in the powerful pack ice of the polar waters in the Weddell Sea. Shackleton, his men, and Canadian sled dogs stayed put for ten months. They played soccer and came up with other diversions to keep their spirits up. The ice eventually crushed the Endurance, leaving these survivors with no option except to live for five months on the ice floes until warming waters put them in jeopardy. They then had to move into their lifeboats, sailing through stormy seas to Elephant Island, a rocky desolate place whipped by severe winds. Living on a diet of penguin and seal meat, they realized that no one would ever find them there. Shackleton and five men set out on a daring 800-mile journey to South Georgia Island, which they knew was inhabited by whalers. This last phase of the documentary is the most dramatic considering the challenges faced by the resourceful Englishman and his companions.

The Endurance is produced and directed by George Butler who shot new footage in the Antarctic to supplement the glass plate negatives and motion picture footage from the 1914 expedition's photographer Frank Hurley. As is typical in questing stories, Shackleton started out with one objective in mind, but ended up seeking something else entirely. His goal became to save the lives of all his crew during this two-year ordeal in the word's most inhospitable terrain and climate.

Extras on the DVD include a director's commentary, trailers, animated selections, and several short companion documentaries. The most interesting of these is "The Tale of the Endurance," an historical roundup of facts about Alexander of the expedition. Others feature an interview with Frank Hurley's twin daughters and scenes from a reunion of descendants of the Endurance crew. 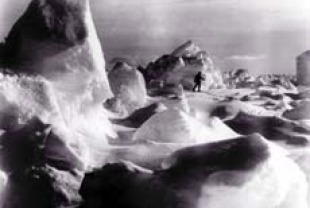