Directed by Daniel M. Cohen
An immensely appealing story which probes the mutual benefits for two salesmen when they choose to go with the flow of their unlikely friendship.

All kinds of salespersons carry jewelry, but those who carry "live lines" of precious stones are referred to as "diamond men." Eddie Miller (Robert Forster) has been on the road for 30 years selling jewelry to small stores in Pennsylvania. He is a master at security — keeping a very low profile by staying in out-of-the-way places and never drawing attention to himself.

After a heart attack, Eddie is ordered to retire since he is no longer "insurable." But his boss gives him a little more time by allowing him to break in the fellow who will replace him — Bobby Walker (Donnie Wahlberg), a young man whose previous experience was in vending machine merchandising. These two have nothing in common — they are like salt and pepper with different tastes in music, cars, and women.

Similar in spirit to last year's unheralded gem Spring Forward, this immensely appealing and well-acted film was written, produced, and directed by Daniel M. Cohen. At first Eddie and Bobby are uneasy with each other. But gradually they begin to share personal stories. We learn that Eddie's wife died recently and that Bobby cheated on a psychological test to land this job. Eddie relaxes into the mentor role, and Bobby begins to pay attention to what he has to teach him.

When the younger diamond man learns that Eddie has not gone out for a long time, he takes him to a backwoods massage parlor run by Tina (Jasmine Guy), a longtime friend of his. Eddie is very uncomfortable at the place and only after a lot of pressure does Bobby succeed in taking him back there to meet Katie (Bess Armstrong), a very special woman Tina has found for him. Much to the older man's surprise, he is taken with her and makes plans to meet again for dinner.

Robert Forster puts in an Academy Award caliber performance as the middle-aged Eddie Miller, who is locked in a prison of routine. Oddly enough, the irresponsible and irrepressible Bobby becomes a facilitator for Eddie, opening up his life to a wider world of love and new possibilities. 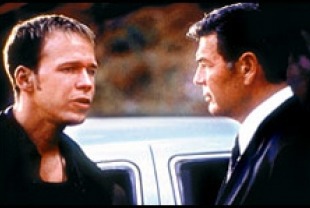