Directed by Richard Linklater
A visionary animated film of deep play that is stylistically innovative and spiritually rich in content.

Waking Life, written and directed by Richard Linklater (Slacker) is a visionary animated film of deep play that is stylistically innovative and spiritually rich in content. At the beginning, a little girl tells us: “Dream is destiny.” Then a little boy looks up into the night sky, sees a shooting star, and suddenly floats up off the ground, able at the last second to grab hold of the door handle of a parked car. What holds us to earth? Or as another character in the film says, “Are we sleepwalking through our waking state or wake-walking through our dreams?”

Linklater shot the film on video and then animated the images using computer software and a machine called the Wacom Tablet. The result is an eerie visual look where faces, eyes, and bodies undulate and everything looks fluid and in flux.

Waking Life conveys a world where the protagonist (Wiley Wiggins) goes on a quest to find out as much as he can about dreams. He is especially interested in learning about lucid dreaming as practiced by shamans and other creative souls who cherish the imaginal realm and see it as real as the realm of tables, pudding, and digital numbers.

Linklater believes that the greatest story ever told is “people, gestures, moments, bits of rapture, fleeting emotions.” He agrees with all the spiritual teachers who affirm that “There’s only one instant, and it’s right now, and it’s eternity.” Linklater also seems to concur with the great Catholic film theorist Andre Bazin who said that film is able to record holy moments of the ongoing incarnation of God. Going to movies can become, with the right intention, an encounter with the Divine.

The various characters who talk to the Everyman protagonist tell him not to submit to dehumanization, boredom, the enslavements of the corporate slave state, fear, or revenge. Others encourage him to cherish real dialogue (“When we communicate with one another and we feel that we have connected and we think we’re understood, I think we have a feeling of almost spiritual communion.”), to eschew negativity (“The quest to be liberated from the negative, which is really our own will to nothingness.”), to celebrate the present moment (“The ongoing WOW! Is happening right now.”), and to stay alert (“The worst mistake that you can make is to think you’re alive when you’re asleep in life’s waiting room.”).

In the final scene, this dreamer on a quest learns from the director, a character playing pinball, that God is continually asking us to join Him and we say, "No thank you; not yet." Time & movies & dreams & imagination & fun & the greatest story ever told are all opportunities to express our "Holy, Holy, Holy" with passion and presence. Waking Life was one of the best films of 2001.

The DVD has an impressive package of extras that will appeal to the questing spirit of viewers. Two audio commentaries provide the insights of director Richard Linklater and the animators. A "Making of Waking Life" featurette gives more interesting information about the process used to create the film's fascinating visuals. There is even an "Animation Software Tutorial" in which animator Bob Sabiston demonstrates the program he used to bring the images to life. 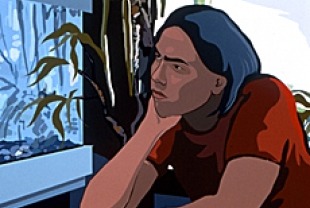