Directed by Peter Docter
A funny and frolicsome computer-animated feature that proves once and for all that laughter is a better renewable energy source than scares.

Monstropolis is an alternate world of unusual creatures of all shapes and sizes who depend on the scares of children to provide the energy for their city. Every day an elite cadre of monsters enter a factory, and in the evening they enter through closet doors into the rooms of sleeping children to collect their screams.

The top Scarer of the factory run by Henry J. Waternoose (voiced by James Coburn) is James P. Sullivan (John Goodman), also known as Sulley. He's an eight-foot blue-green monster with purple spots and horns. He has a ferocious growl. Sulley's Scare Assistant is the talkative Mike Wazowski (Billy Crystal), a one-eyed lime-green monster who's got the hots for Celia (Jennifer Tilly), the receptionist at the factory.

Randall Boggs (Steve Buscemi), a chameleon-like lizard, desperately wants to dethrone Sulley to become the number one Scarer. His shenanigans lead to the appearance of a little girl in Monstropolis. Sulley finds her and shelters her even though everyone's been told that children are toxic and a special "Child Detection Agency" has been set up to decontaminate anyone or anything from the world of kids.

Peter Docter directs this funny and frolicsome computer-animated comedy from Pixar, the Academy Award-winning creators of Toy Story. The screenplay by Andrew Stanton and Daniel Gerson has some clever things to say about fear, the energy crisis, competition, and conspiracies. Goodman is especially good as a gigantic male monster who hasn't quelled his feeling function. His nurturing instincts come to the fore and provide the catalyst for the inventive and satisfying finale. 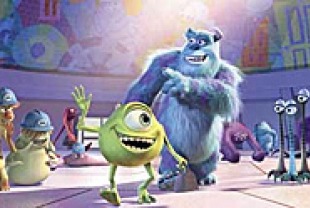