Directed by Richard Linklater
A compelling drama about the reunion of two high school buddies that turns into a battle of wills.

John (Robert Sean Leonard) is a filmmaker who has just arrived in his hometown of Lansing, Michigan, for the premier of his first movie at a local film festival. Riding on a high of energy, he meets up with his old high school buddy Vince (Ethan Hawke), who has flown in from Oakland, California, for the event. "It's great to be alive!" says this 28-year-old small-time drug dealer and volunteer fireman. "Totally," responds John, who immediately launches into a nonstop critique of Vince.

Learning of his breakup with a girlfriend, the filmmaker advises Vince to give up his machismo violent tendencies which aren't appealing to women. Then John criticizes Vince's work and says, "I think you can do better than you are." In response, the volunteer fireman drinks more beer and starts smoking some marijuana.

Vince has a few tricks up his sleeve that have been on his mind for a long time. He's still stewing in a vat of anger and resentment over the one-night fling John had with his girlfriend Amy ten years ago. Turns out that the filmmaker had a violent streak that came out during that night of sex. Vince believes it was date rape, and he pushes his old buddy to confess. The power plays between these two young man takes a surprising turn when Amy (Uma Thurman), now an Assistant District Attorney in Lansing, arrives after being invited there by Vince.

Adapted from a one-act play by Stephen Belber, Tape was shot in video in a seedy motel room. Richard Linklater (Waking Life) directs this emotion-charged drama about male anger, resentment, jealousy, competition, and one-ups-manship. "Ethics," the Dalai Lama has said, "is like a cool rain which extinguishes hatred and anger within you." In this instance, there is no relief from the scorching emotions that have set friend against friend. 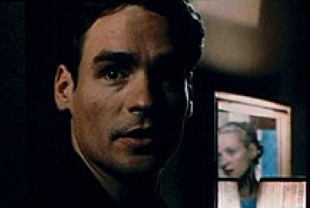