Directed by Ray Lawrence
A richly nuanced psychological drama, circles around the complicated subject of love and offers ample insights into the sources of emotional illiteracy.

"When we focus on romance, the single most irrational, volatile, and often illusory form of love, we fail to consider that love may be an art involving skills that need to be developed and practiced throughout a lifetime," Sam Keen writes in To Love and Be Loved. "As a consequence, we have no school, no curriculum, that teaches us how to cultivate the disciplines and delights of love that give meaning and depth to our lives. When it comes to love, we are emotional illiterates." The characters in Lantana, an engaging psychological drama set in contemporary Sydney, Australia, are men and women floundering in their love relationships. Ray Lawrence (Bliss) directs from a screenplay by Andrew Bovell based on his play Speaking in Tongues. The ensemble performances by a gifted cast give this Australian film a luster that lasts long after a first viewing. Most of the men in the story are emotional illiterates, unable to express their innermost feelings.

Psychiatrist Valerie Somers (Barbara Hershey) is married to John Knox (Geoffrey Rush), an academic. Grief has drained the love out of their relationship following the death of their eleven-year-old daughter. While listening to Patrick (Peter Phelps), a gay patient of hers, describe his love affair with a married man, Valerie wonders whether her husband could be the one he's talking about.

Another of her patients is Sonja (Kerry Armstrong), the unhappy wife of Leon (Anthony LaPaglia), a homicide detective. Although they have two children, she still wants a passionate marriage and, for the most part, he seems to be emotionally numb. Sonja's suspicions that he may be having an affair are correct. He's seeing Jane (Rachel Blake), a woman in their salsa dance class. She's separated from her husband Pete (Glenn Robbins).

Jane's next door neighbors are Nik (Vince Colosimo), who's unemployed, and his wife Paula (Daniella Farinacci), a nurse. He looks after their three children and is bothered by Jane's bizarre interest in their day-by-day activities.

In a speech before a group of people, Valerie says: "Trust is as vital to human relationships as breath is to human life and just as elusive." In this film, betrayal is rampant. All of the characters are drawn together when Valerie mysteriously disappears and is assumed to be the victim of foul play. As Leon conducts interviews and looks into details of her life, he feels even more off balance. He bumps into his mistress's husband and the fellow says to him: "Don't you want to cry sometimes?" Leon replies: "Yeah, but you don't, do you?" Both men nod knowingly.

The title of the film refers to an Australian weed that grows in the suburbs and sprouts tiny colored flowers. Like the dense underbrush in the opening scene of Lantana, this richly nuanced psychological drama circles around the complicated subject of love and offers ample insights into some of the sources of emotional illiteracy.

The DVD includes an interesting “making of” featurette in which the cast and crew comment on their understanding of the film’s themes. 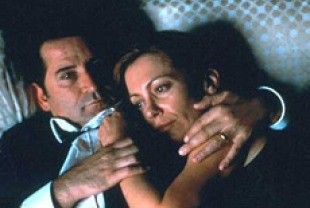