Directed by Jacques Doillon
A spirited French film about a feisty teenage girl's attempts to survive in a tough Parisian neighborhood.

Talia (Stéphanie Touly) is a thirteen-year-old Parisian girl who lives with her mother and sexually abusive stepfather. Knowing that he molested a friend and has his eyes on her younger sister, she's very angry at him. When he kicks her out of her home, Talia tries to look up an old friend in a poor suburb. She and her pit bull named Kim link up with a group of Arab and black boys who live in the projects. They find her a place to stay temporarily.

Iliès (Iliès Sefraoui) takes a shine to Talia but doesn't interfere when his buddies decide to steal her dog. They secretly sell it to some older boys. Iliès buys Talia a gun so she can protect herself. Soon she has the nickname "Tyson" for the tough guy persona she assumes. Worried about the fate of her younger sister, Talia checks back in at her home but things have gotten worse in terms of her stepfather's animosity toward her. All the while, she really misses her dog.

French director Jacques Doillon's 1996 film Ponette was a riveting portrait of a young girl in grief. He has a knack for presenting in natural ways the hardships and challenges of youth. Here he draws out a robust performance from Stéphanie Touly as a teenager who must find her way in an alien environment without her beloved Kim. At one point, she actually robs a couple in their apartment in order to get the money to save her dog. Most of the "little fellas" survive on the streets through robbery and petty crime with the older youth looking down on them. There are several close encounters with the police. Through it all, Talia maintains her sense of righteous indignation at the injustices that twist and turn her life around. She even manages some hard-earned smiles near the end of the story when her buddies throw a mock wedding ceremony for her and Iliès. 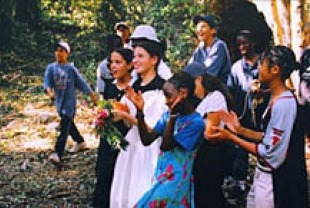