Directed by Chris Wedge
A very entertaining family film with a very relevant moral message: In a dangerous world, looking out for number one just won't cut it.

In order to avoid the dangers of the imminent Ice Age 20,000 years ago, Earth’s menagerie of creatures join together in a pilgrimage to the south. Some mavericks decide to go their own way. Manfred (voiced by Ray Romano) is a woolly mammoth who prefers solitude to marching with the crowd. Of course, to teach him a spiritual lesson, fate puts him together with Sid (John Leguizamo), a wacky sloth whose family has abandoned him. He turns to Manfred for assistance when two nasty rhinos give him a hard time for horning in on their slim food pickings. The large-limbed mammoth and the slow-paced, talkative sloth make quite an odd couple as they trek across the ice-covered landscape.

Chris Wedge directs this snappy, funny, and cleverly conceived all-digital, animated feature film. He won an Oscar for Bunny, an animated short. Everything about this comedy works from the wonderful characters to the madcap antics of a very irritable Mother Nature who explodes in volcanic eruptions, avalanches, storms, and other calamities. When Manfred and Sid happen upon Roshan, an abandoned human baby, their maternal instincts come to the fore on a mission to return the child to his tribe. They are joined by Diego (Denis Leary), a savage saber-tooted tiger who has some sinister plans for them.

Ice Age is a very entertaining family film with a moral message that is more relevant now than ever: In a dangerous world, looking out for number one just won’t cut it. Putting ourselves out for others in our little herds is a survival tactic that works. And forming alliances with those who are most different from us is not only spiritually wise, it is the only way to go in a world that keeps evolving. Those who insist on doing their own thing -- like Scrat, the prehistoric squirrel/rat who starts and ends this spiffy parable -- are doomed to a Sisyphean struggle.

The DVD release is a two-disc set. Disc One has the movie in two formats and an audio commentary by director Chris Wedge and co-director Carlos Saldohna; there are also some DVD-Rom interactive games. Disc Two includes bonus shorts, including a five-minute one called “Scrat’s Missing Adventure” and “Sid on Sid” with scene-specific audio commentaries by John Leguizamo as Sid. There are also several featurettes on the making of “Ice Age,” covering the development of the characters and their voices, the lighting, special effects, and more. Deleted scenes and promos round out the extras. 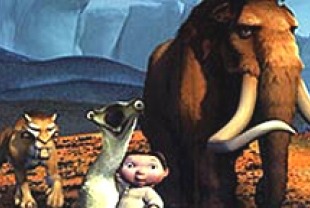