The Other Side of Heaven

Directed by Mitch Davis
Lifts up enthusiasm as an energizing and radiant way of life through the story of a Mormon missionary.

One of the factors behind the phenomenal growth of the Mormon Church is its unique missionary program that puts young men and women in the field. This film, written and directed by Mitch Davis, is based on the memoirs of John H. Groberg, a high-ranking leader in the Church of Jesus Christ of Latter-Day Saints. It will make a fine companion piece to God's Army, a 2000 movie that explored the missionary efforts of some ardent young men in Los Angeles.

John Groberg (Christopher Gorham) is a student at Brigham Young University in 1953 when he is called to mission service in Tonga, a South Sea island. This Idaho farm boy, who plays the trumpet, knows that before leaving he must make clear his love for Jean Sabin (Anne Hathaway). In a very romantic courtship, he asks her to wait for him to return and notes that they will always be together under the same moon in the sky.

The three-month journey to Tonga is filled with obstacles that test John's patience. When he finally arrives, his companion, Feki (Joe Folau), is there to serve as his interpreter and aid him in his ministry. One of the Mormon converts in the small village tells his friends that during the Elder's first talk they must nod their heads and look interested. John stumbles through this ordeal and then takes time off to learn the Tongan language.

Many Mormons when talking of their missionary system point out that people like John start out as boys and return as men. John's initiation into the real world of suffering, pain, tragedy, and hardship opens his heart. He heals a young boy; has the soles of his feet bitten by rats; saves a little girl during a hurricane, and endures near starvation in the aftermath of the storm when food is in short supply. His develops a deep friendship with Feki.

Throughout his spiritual adventures, John is buoyed by letters to and from Jean; she is his lifeline. The most attractive young woman in the village wants to have sex with John but his strict adherence to the Mormon moral code and his allegiance to Jean enable him to overcome this temptation. Although a minister from another religion does try to set the Tongan people against John, he does a turnaround and demonstrates his respect for the disciplined young man’s ministry in a touching and surprising act of charity.

"Spread your love everywhere you go," Mother Teresa said. "Let no one ever come to you without leaving better and happier." John Groberg leaves Idaho as an idealistic youth and returns home a seasoned young man eager to serve others. The Other Side of Heaven lifts up and celebrates the spiritual practice of enthusiasm as an energizing and radiant way of life. 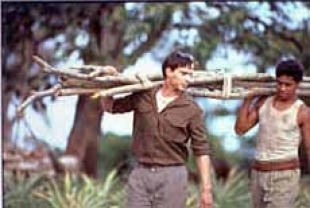