Directed by Joel Zwick
A robust romantic comedy filled with high spirits and a celebration of ethnicity.

Toula (Nia Vardalos) is a very unhappy 30-year-old single woman. She works at Dancing Zorba’s, the Chicago Greek restaurant owned by her parents, Gus (Michael Constantine) and Maria (Lainie Kazan). She finds the love of all things Greek to be oppressive — especially her father’s belief that “nice Greek girls are supposed to do three things in life: marry Greek boys, make Greek babies, and feed everyone until the day we die.” Convinced that she’s going to be a spinster, Toula says in voice-over: “I wish I had another life, but it’s useless to dream because nothing ever changes.”

Then one day, she is bowled over when she sees Ian Miller (John Corbett), a high school teacher, eating in the restaurant with a friend. He’s the man of her dreams but she’s too shy and flustered to act on her feelings. This convinces Toula to make a drastic change in her life. She gets contact lens, some new clothes, and takes a computer class in college. She even convinces her very traditional parents to allow her to switch jobs and work at her aunt’s Greek travel agency.

Joel Zwick directs this romantic comedy that has the same ethnic charm as Moonstruck (1987). The film is based on a one-woman show written and starring Nia Vardalos of the famed “Second City” drama troupe. Toula and Ian meet again, fall in love, and decide to get married. However, her father is mortified at the thought of his daughter marrying a non-Greek. Ian, however, proves to be a relaxed young man willing to meet all the requirements of the Portokalos clan — including being baptized into the Greek Orthodox Church in a special ceremony.

The drama hits high stride in its very funny portrait of the wedding festivities — a mix of surprises, high spirits, and cross-cultural glitches. Ian’s country club parents (Bruce Gray and Fiona Reed) are quite taken aback at the garish behavior of Toula’s relatives who drink, dance, and eat with great relish.

One of the miracles of love is that Ian’s accommodating attitude toward the eccentricities of Toula’s family enables her to relax in their presence as well. In the end she realizes, “My family is big and loud, but they’re my family, and they’ll always be there.” 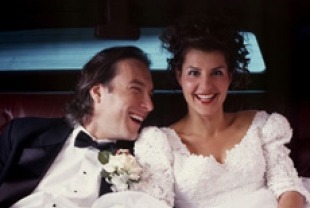