Directed by Michael Apted
An espionage thriller in which director Michael Apted makes the most of a script by Tom Stoppard.

In 1943, Tom Jericho (Dougray Scott), a brilliant code breaker, reluctantly returns to Bletchley Park, Britain’s top-secret Station X, after taking a leave of absence for a nervous breakdown. He is desperately needed to help break a code that the German Navy uses on their enigma cipher machines. A large Allied merchant shipping convoy crossing the Atlantic is in serious danger. Jericho was part of the team who broke the original code.

In a series of flashbacks, we learn that this shy code breaker was swept off his feet by Claire (Saffron Burrows), a cipher clerk after meeting her at a concert. Then suddenly she ended the affair and refused to see him. Now Jericho learns from Claire’s dowdy roommate, Hester Wallace (Kate winslet), that she has disappeared. After finding four sheets of the original cryptograms under a floorboard in her cottage, the two of them decide to find Claire before she is apprehended by the authorities for taking these papers from Bletchley Park.

Michael Apted (The World Is Not Enough) directs this sophisticated thriller based on a bestselling novel by Robert Harris. Much of this sparkle comes from the literate screenplay by Tom Stoppard, who won an Academy Award for writing Shakespeare in Love. The best lines in this espionage drama go to Wigram (Jeremy Northam), an upper crust member of the secret service who enjoys intimidating people, especially those he considers to be his social inferiors. He’s convinced there is a spy within Bletchey Park. In the course of their adventures to clear Claire of any wrongdoing, Jericho and Hester are especially proud of their ability to run circles around Wigram. The revelations that surface in the film’s climax are quite dramatic and include a massacre covered up by the British to protect their allies, the Russians. 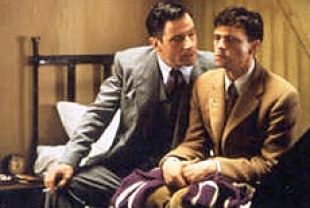